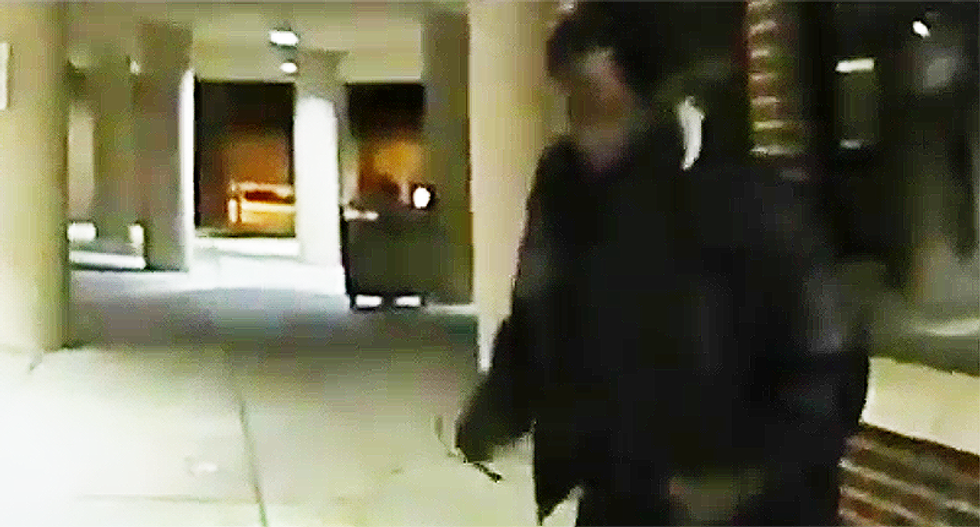 According to KFOR, two officers were placed on administrative leave related to the incident.

The victim's uncle, Michael Washington, explained that Kessee went to the hospital on complaints of a headache. Officers attempted to persuade Kessee to go to the Salvation Army after the hospital released him.

"We believe that there was no actual mental evaluation, we believe that the doctors, hospitals, did not review or take the physical assessment of my nephew and that they are partly responsible and they will be held accountable​," Washington explained.

Kessee was instead taken to the jail and placed in a padded cell after trying to allegedly hurt himself. He was then found unresponsive and taken to the hospital where he was pronounced dead.

The video shows officers telling Kessee that they need to take him outside and that he must leave the hospital. Kessee had a hard time moving, so officers put him in a wheelchair. The body cam video shows Kessee's hands shaking as he attempts to put on his glasses.

The officers quickly turned hostile, however. They refused to give the man a ride to the Salvation Army, which was across the street. "I don't give rides. He can walk," one is heard saying. They tried to get him to put on his shoes and walk across the street. When Kessee tries to stand up he stumbles and falls.

"He's just acting like this to get back in the hospital," the officer says.

"Hey, Mr. Kessee, listen to me, OK? You can stop with the show," another officer shouts.

"Yeah, it ain't fooling a single person, I can tell you that," the other officer says.

Kessee tries to explain that he came to the hospital because he needed help. The officers asked him what drugs he took. Kessee explained that he didn't take any opioids.

"You're not on drugs?" an officer asks. Kessee shouts "No!"

"Here in about 15 seconds, I'm going to drag your [expletive] to the curb to get you off this property and then you can find your own way to the Salvation army. Ok? Put your shoe on. I'm losing patience," the officer said.

Kessee ultimately ended up on the ground in handcuffs.

Despite officers not doing anything to help the man, Norman Police Chief Keith Humphrey claimed the officers had nothing to do with the death of Kessee.

Police responded to three calls that night at the hospital, two prior to Kessee's as well as one at the detention center where he was sent.

"I just got a message from my supervisor that we’ve got a patient out in our waiting room that’s wigged out and they need some assistance," the caller from the hospital said.

"Wigging out means to me that someone who’s not quite capable or understanding his immediate environment or situation," Washington said, explaining that Kessee should have been sent to a crisis center and not to jail.

The Norman Regional Hospital refused to comment and refused to give a response to a request for how the hospital deals with patients Kessee. They said they're reviewing his case internally.

A 2014 report by the Treatment Advocacy Center stated that “prisons and jails have become America’s ‘new asylums.’” There are ten times more mentally ill people in jails and prisons than in state psychiatric hospitals, the report revealed. In 2012 alone approximately 356,268 inmates with severe mental illness were behind bars and only 35,000 severely mentally ill patients are in state psychiatric hospitals.

Between 2009 and 2012, state mental health cuts totaled $4.35 billion, according to Governing Magazine. Oklahoma is one of the states struggling with funding to mental health services. As the Republican legislature and Gov. Mary Fallin (R-OK) have passed tax cuts, the Oklahoma Department of Mental Health and Substance Abuse Services leaders announced in November that the state agency must cut 23 percent of its annual budget. The $75 million effectively eliminated all outpatient services by December 2017.