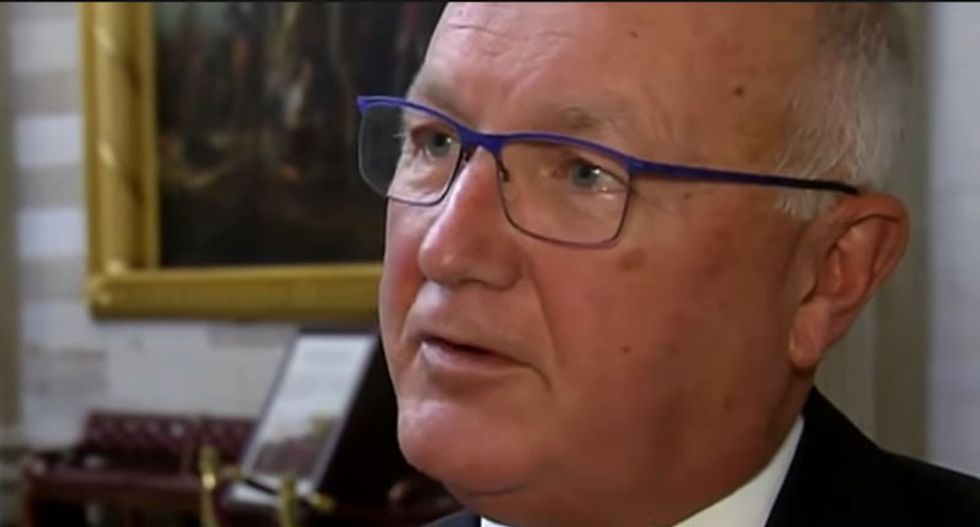 Trump’s ambassador to the Netherlands, Pete Hoekstra, is proving himself to be just as embarrassing as many of this administration’s other appointees.

You may remember Hoekstra from his viral humiliation in December, when he was caught on camera lying about racist and unfounded statements about the threat of radical Islam. At a 2015 conference, he grossly exaggerated its dangers, claiming “the Islamic movement has now gotten to a point where they have put Europe into chaos.” Hoekstra said there is “chaos in the Netherlands, there are cars being burned, there are politicians that are being burned. And yes, there are no-go zones in the Netherlands.”

When a reporter pressed him on the accuracy of these statements last month, he summoned the spirit of his appointer, Donald Trump, claiming: “I didn’t say that, it’s an incorrect statement. We’d call that fake news.”

Then that reporter showed him the exact clip in which he made the initial remarks about chaos and burning, and asked to confirm: “You call that fake news?” Hoekstra doubled down. “I didn’t call that fake news. I didn’t use those words today.”

On Wednesday, Hoekstra dug himself into an even deeper hole at a Dutch press conference marking the beginning of his ambassadorship when reporters asked again for Hoekstra to clarify: “Are politicians being burned in the Netherlands? Is that something you believe?”

“I’m not revisiting the issue," Hoekstra replied. He refused to say anything further, and the room exploded in protest. “Why don’t you answer the question?” one journalist called out.

“This is the Netherlands, you have to answer questions,” another said. Whoever she is, she should be promoted to White House correspondant— god knows we could use her in the States.

Hoekstra issued a strange half-apology last month after his first “fake news” confrontation, but provided absolutely no clarity on his false beliefs about burning cars and politicians, and mythical Sharia-ruled "no-go" zones in the Netherlands. His racial insensitivity shouldn’t surprise anybody; Hoekstra came under fire for issuing this racist Super Bowl ad against his opponent in their 2012 race for Michigan Senate. (The comedy brand Funny or Die later released this parody of the ad, which is worth a watch if you need some comic relief from the constant pain of being American right now.)

Watch the video of Hoekstra's interview below.
Report typos and corrections to: corrections@rawstory.com.