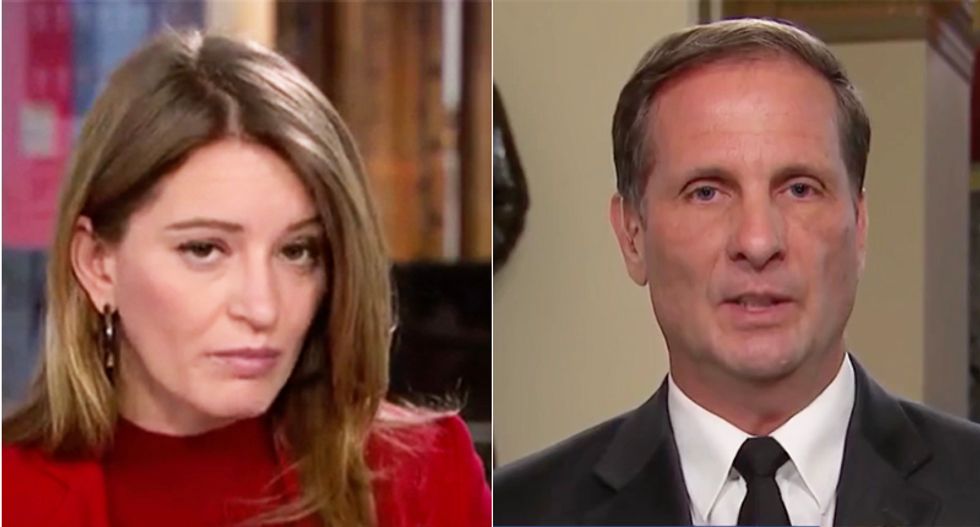 Appearing with MSNBC host Katy Tur, a Republican from Utah blew off questions about the appearance of a purge at the FBI by President Donald Trump, saying the two of them "see the world differently," and then adding the sexist slur, "Men are from Mars, Women are from Venus."

According to Rep. Chris Stewart (R-UT), the controversial memo complied by House intel head Rep. Devin Nunes (R-CA) contains no smoking gun, and admitted that some of his colleagues hyped up the blockbuster potential of the document because it makes "for good television."

Where things went off the rails, was when Tur pressed the Republican on the purge of both former FBI Director James Comey and now departed Assistant Director Andrew McCabe.

"President Trump wanted to fire Director Comey and he wanted him gone after he refused to drop the Russia investigation," Tur told the GOP lawmaker. "He said it was about Russia to NBC's Lester Holt. Comey was fired. President Trump railed against Andrew McCabe on Twitter and repeatedly insulted him and his wife, and now McCabe is stepping aside. How do you not see this as a deliberate purge of everybody who the president doesn't like or who could potentially threaten the president in a Russian investigation?"

"Katy, I know you and I see the world differently," Stewart shot back. "And this is just one of those cases where, you know, men are from Mars and women are from Venus."

"I'm sorry," the stunned Tur said as she cut him off. "Hold on. You think we see the world differently? I just laid out a number of facts."

"Well, let me respond to them, because we clearly do see the world differently," Stewart parried. "Look, people can say or look at things and claim facts or claim their interpretation of facts -- but they clearly have different views."

"Let me respond, let me respond, Stewart replied. "Are you supporting -- are you proposing that Mr. McCabe resigned because of Donald Trump? Because I think that would be silly, for heaven's sake. The FBI is independent. Mr. Trump can't fire him or hasn't threatened to fire him. I believe he resigned because of some of the information contained in this memo that's about to come forward."