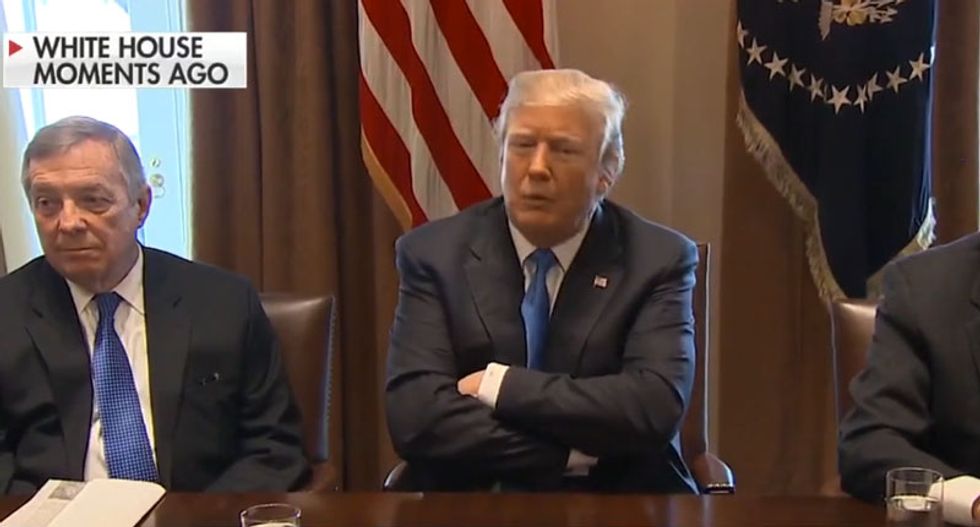 During a bipartisan White House meeting on immigration Tuesday, Republican leadership tried, and failed, to keep Donald Trump in line with the GOP agenda—leading the official White House transcript of the meeting to omit a key moment of agreement between the president and Sen. Dianne Feinstein (D-CA).

As the Washington Post reports, at one point in today’s striking meeting on immigration reform, Trump told Feinstein he’d “like” to pass a clean DACA bill that would protect children brought to the United States illegally without provisions for increased border security.

“Yeah, I would like to do it,” Trump said when asked if he would support such a bill.

“Mr. President, you need to be clear, though,” House Majority Leader Kevin McCarthy (R-CA) reportedly interjected. “I think what Senator Feinstein is asking here—when we talk about just DACA, we don’t want to be back here two years later. You have to have security.”

As the Post notes, in its official transcript of the meeting, the White House struck Trump’s “I’d like to do it” from the record. A White House official told the Post’s Phillip Rucker the move was “unintentional.”

When we asked about the key quote gone missing, a White House official told us any omission was unintentional
— Philip Rucker (@Philip Rucker) 1515553358.0

As the New York Times’ Maggie Haberman reports, this isn’t the first time the White House has omitted inconvenient remarks by Trump.

Of course, that’s not really how “the record” works.