'Who did you talk to?' Trump advisor destroyed on CNN after insisting black Americans are praising Trump ‘on the street’ 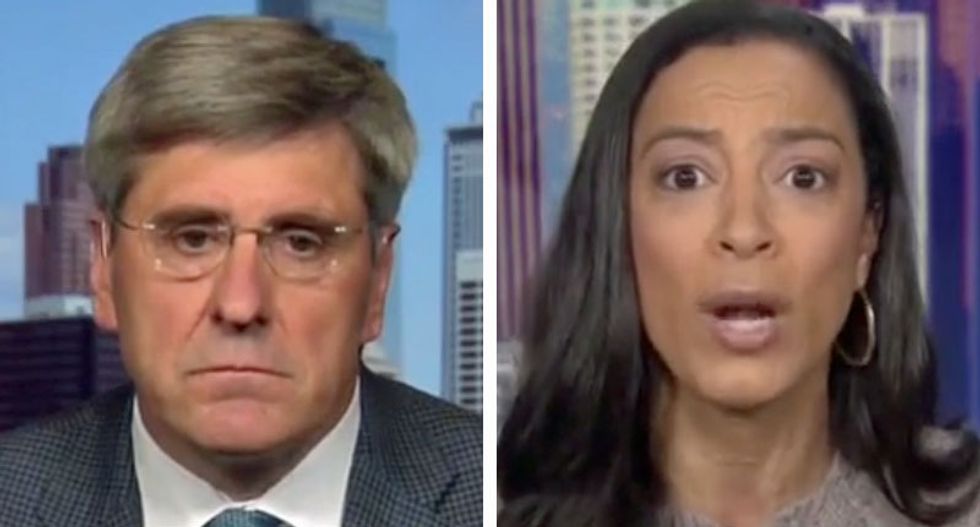 CNN host Brooke Baldwin had to fact-check a Trump campaign advisor's analysis of minorities supporting the White House in a contentious panel segment that ended with a public wager on election results.

"Just jump right in, given this whole controversy, the president, the president's past and things he has said, is it not fair to ask that question?" Baldwin asked, referring to whether President Trump is a racist.

"Well, look, I've been in meetings with Donald Trump many times in the last two years and I've never once heard him say anything disparaging," former Trump campaign economics advisor Stephen Moore argued. "I think the point that Sarah Huckabee was making was a good one, look at his record and what he has done in terms of his business accomplishments, the fact that he has hired thousands of blacks and Hispanics."

"Stephen, I just have to jump in, you don't have to be in a meeting with this man to hear some of the comments he has made, the Pocahontas reference, his comments after Charlottesville, the Central Park Five. What am I missing? Judge Curiel some months ago," Baldwin noted. "Is that not a fair question to be asking, based on what the president has said very publicly?"

"Brooke, I think what you're missing and a lot your colleagues at CNN are missing, you have to look at this guy's record when it comes to civil rights not necessarily what he said or is alleged to have said," Moore answered. "Brooke, if this man is a racist, why is it that his approval rating, among blacks, has increased while he has been president? It's because of his record, not what he says."

"I'm so glad that Stephen wants to talk about Donald Trump's record, so let's," Rye began, before listing multiple incidents that have lead people to conclude Trump is racist.

"I don't care if he was elected to this office or not, he is a racist," Rye charged. "This country has to atone for the fact that it has put a racist in office."

"Look, I think there are times when Donald Trump uses language that I strongly disapprove of, Brooke," Moore replied. "My point is, look at this man's record and what he has done for black Americans."

"I talk to so many black Americans myself and they say what they like about Donald Trump, those who approve of his policies, because they think he is going to make America great again," Moore suggested.

"I talk to people all the time, when I'm on the street I talk to people, on the job I talk to people, when I talk to African-Americans and also Hispanics, a lot of times they don't like his language, but sure like what he's doing for the economy," Moore claimed. "That's the reason I bet you when he runs for re-election, he get a higher rate of black and Hispanic vote than he did in 2016, because he'll be running on his record."

"I'm going take you on that bet," Rye answered. "The only thing I hear black and brown folks and women talking about, and Native American folks is one word, and that’s impeach. I hope he doesn’t make it to 2020."