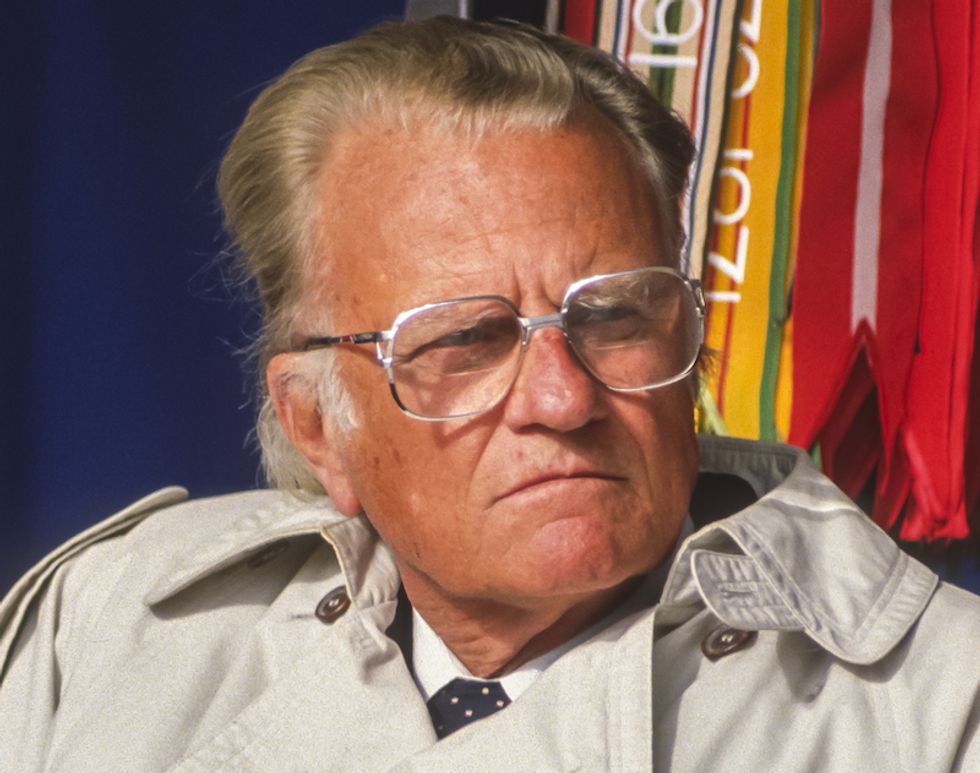 Billy Graham, the firebrand evangelical who helped usher in the rise of the evangelical right, is dead at 99.

Graham is getting tributes from all corners right now. And he deserves praise for supporting the civil rights movement, supporting Nelson Mandela during his imprisonment and embracing Muhammad Ali during the fall-out of his conversion to Islam. All those good deeds will be covered in great detail today.

In fact, Graham was already the subject of a rare and precious honor, a Trump Tweet that does not appear, on the surface, to be either an attack on his enemies or bare-faced self-aggrandizement. This honor is roughly equivalent to the Presidential Medal of Freedom from past administrations.

The GREAT Billy Graham is dead. There was nobody like him! He will be missed by Christians and all religions. A very special man.
— Donald J. Trump (@Donald J. Trump) 1519222927.0

But while Graham certainly did many great things, he also said and did some awful things. And because he was so respected, his deeds were very influential.

Graham helped normalize ultra-rich pastors. Graham's wealth, and focus on more wealth, was modest compared to the televangelists preaching the prosperity gospel today. His net worth was estimated at $25 million and while Jeff Bezos might spend more on a clock, it's certainly not a vow of poverty.

Graham once preached that AIDS was the judgement of God. "Is AIDS a judgment of God?" he had said in Columbus, Ohio in 1993, "I could not be sure, but I think so." Graham quickly backtracked on this one, saying that he didn't believe that and didn't know why he said it. Nevertheless, this dog-whistle was heard by too many.

Graham wrote a memo to President Nixon urging him to commit a war crime in Vietnam. Unlike many Christian leaders, Graham supported a very specific military strategy in the Vietnam war. He wanted Nixon to use nuclear weapons to destroy the dikes that manage flooding in North Vietnam. This plan was something Henry Kissinger dismissed as "just too much."

Graham was anti-Semitic. Graham used the whole "I don't believe that and have no idea why I said it" thing a few times. For example, after taped conversations revealed that Graham made anti-Semitic statements to President Nixon. Specifically, he told the president that Jews control the media, and that this was dangerous: "This stranglehold has got to be broken or this country's going down the drain." Nixon agreed with this, and Graham suggested that if he got elected to a second term "we might be able to do something." Graham would later point out that he had Jewish friends.

Graham had backward views on women. He criticized feminism, and is the namesake of that weird rule that Mike Pence lives by, never spending any time alone with any woman besides his wife.

Graham raised his boy wrong. In his 1997 autobiography, Graham was regretful of his involvement in politics, writing that, "If I had to do it all over again, I would also avoid any semblance of involvement in partisan politics... there have been times when I undoubtedly stepped over the line between politics and my calling as an evangelist." And yet, Graham failed to impart this wisdom on his son Franklin Graham, who took over the Billy Graham Evangelistic Association and who has taken the lead in defending and legitimizing Donald Trump to evangelicals. Franklin Graham told his flock to "hold your nose and go vote," and has said that the trice-married serial philanderer is a "changed man" that "all Christians need to get behind."