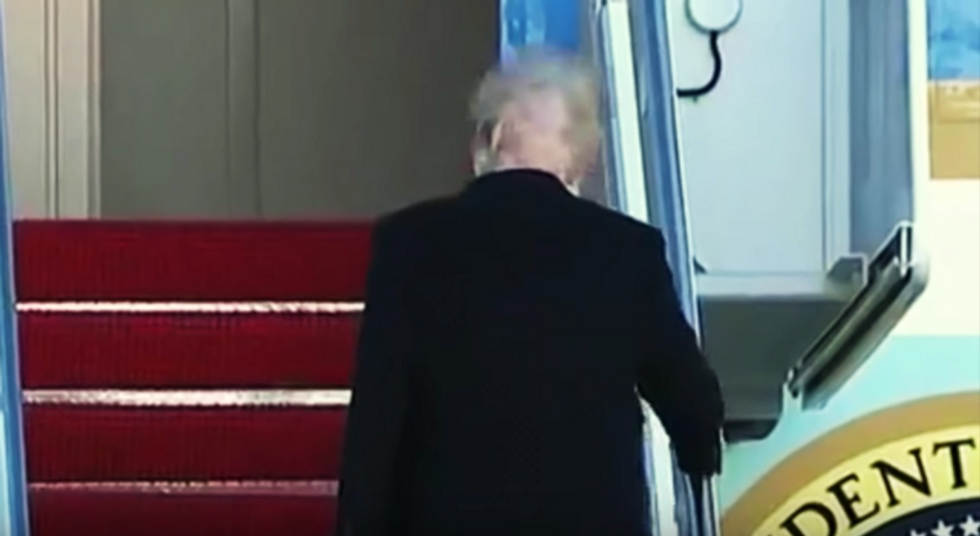 On Tuesday evening, journalist Ashley Feinberg noticed something off about a YouTube video showing President Donald Trump boarding Air Force One. Specifically, she noticed that the president's hair appeared thinner than most of us have ever seen it before.

"At first I didnt think this could possibly be real but.... I think it is?" Feinberg tweeted with a link to a video simply titled "The Real Donald Trump."

In the video, the wind generated by the presidential plane propellers blows his hair and reveals Trump's scalp.

Feinberg included a photo containing Getty Image's watermark. Upon searching Getty's database for Joint Base Andrews, Raw Story confirmed the image does indeed exist and is for sale on their website.

"US President Donald Trump walks to Air Force One prior to departure from Joint Base Andrews in Maryland, February 2 as he travels to Mar a Lago in West Palm Beach, Florida, for the weekend," Getty's caption reads.

"Imagine what those locks look like soaking wet," the journalist mused, articulating something no one wants to think about in tandem with a GIF of the president ascending the Air Force One stairs with his scalp revealed.