CNN panel pokes holes in 'Fox News fever' dream: 'Some deep state if we're only learning about investigations after the election' 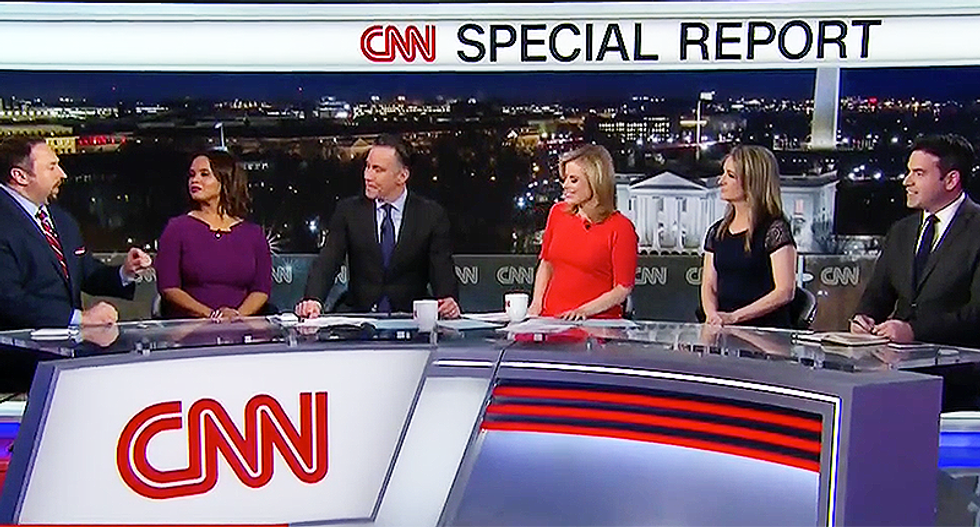 In a perfect takedown of the Republican Party's so-called "deep state conspiracy," a CNN panel of experts dissected the logic behind the Fox News fever dream that the FBI was always out to get President Donald Trump.

Former Hillary Clinton press secretary Brian Fallon pointed out that the FBI was doing two different investigations on both presidential candidates running in the 2016 election. Democrats like Fallon were critical of the FBI then, but now it seems the tables have turned.

"But it's because of just that that makes this whole conspiracy theory that is the basis for this pent-up demand from the Fox News fever-swamp-crowd to release this memo so crazy," he said. "I mean, think about it, if you want ot believe the theory behind the folks that are pushing for the [Rep. Devin] Nunes (R-CA) memo, what they're arguing is that there is this deep state effort to sink the Trump campaign in 2016."

That's when Fellon called out the two investigations going in at the same time.

"But we only ever heard about one of them," he noted. "We knew about Hillary Clinton's email investigation but not about the Trump and Russia investigation, which is still going on and has produced two guilty pleas and two other indictments. It was never breathed a word of during the whole campaign. The voters went to the poles never knowing about it."

Fallon called it "a heck of a deep state conspiracy to sink the Trump campaign, where they were actively waging this investigation seeking FISA approval to get certain people surveilled but they decided to keep it under wraps and never tell the voters about it before election day."

He called the conspiracy theory nothing more than a crazy theory that requires people to now believe Trump's own appointees and a slew of members of his own party are somehow working against him as part of this so-called deep state conspiracy.

Former Trump advisor Jason Miller tried to claim that there were attempts to undermine the Trump campaign during 2016 by the FBI and DOJ because former Attorney General Loretta Lynch met Bill Clinton on the tarmac in Phoenix, Arizona. Republicans were ruthless in criticizing Lynch and Miller continued to do so, yet Lynch never revealed the investigation into Trump's campaign or the FISA warrant prior to Election Day either.

Miller also argued that a series of Republicans have all agreed with Nunes that the memo must be released. As if it was given as a Republican talking point, former Rep. Jack Kingston (R-GA) said the same thing during an earlier panel discussion with Chris Cuomo. Kingston remarked that non-extremist, moderate Republicans were also in agreement.