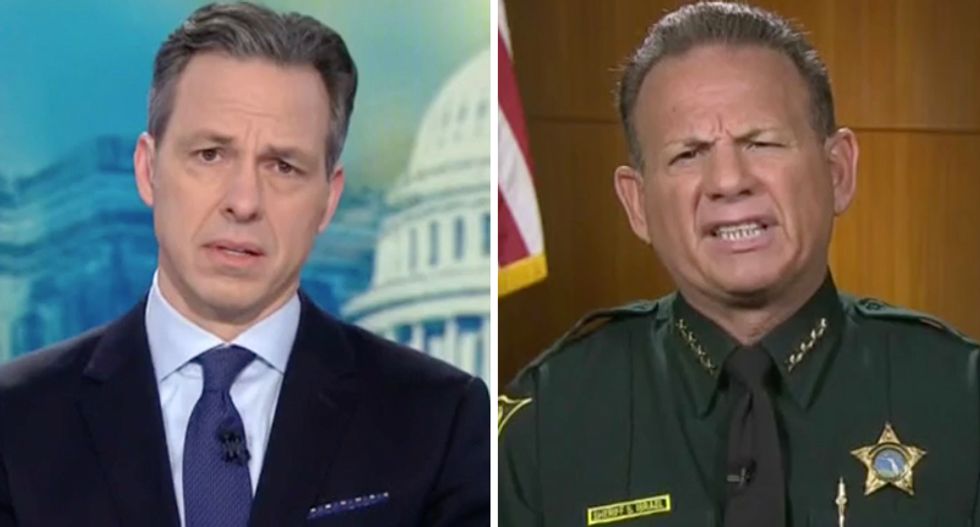 In an extraordinarily contentious interview on CNN's State of the Union, Jake Tapper was gobsmacked when Broward County Sheriff Steve Israel boasted he has shown "amazing leadership" after the host confronted him with a list of failures to do anything about Parkland shooter Nickolas Cruz after numerous warnings about the teen.

The interview, which ran almost 30 minutes, grew harsher and harsher as it went along, with Tapper peppering Israel with revelations of failures at the sheriff's department, which received multiple complaints about the teen who took 17 lives at Marjory Stoneman Douglas High School over a week ago.

Addressing the failures, Israel admitted some failures -- after harshly criticizing the one school resource officer who stayed outside the school while Cruz was still shooting -- before claiming his department was doing a great job in the aftermath.

"We have an active internal investigation and we are looking in to it," Israel told the host. "I can't predict how the investigation is going but I've exercised my due diligence, I've led this county proudly as I always have. Deputies make mistakes, police officers make mistakes, we all make mistakes but it's not the responsibility of the general or the president if you have a deserter. We're looking into this aggressively and we'll take care of it and justice will be served."

"Are you really not taking any responsibility for the multiple red flags that were brought to the attention of the Broward Sheriff's Office about this shooter before this incident, whether it was people near him, close to him calling the police?" an incredulous Tapper asked.

"Jake, Jake, I can only take responsibility for what I knew about," Israel protested. "I exercised my due diligence. I've given amazing leadership to this agency..."

"Yes, Jake. there's a lot of things we've done throughout this. You don't measure a person's leadership by a deputy not going in, these deputies received the training they needed," Israel shot back.

"Maybe you measure somebody's leadership by whether or not they protect the community," Tapper lectured. "You've listed 23 incidents before the shooting involving the shooter and still nothing was done to keep guns out of his hands, to make sure that the school was protected, to make sure you were keeping an eye on him. I don't understand how you can sit there and claim amazing leadership."

"Jake, on 16 of those cases our deputies did everything right, our deputies have done amazing things," the sheriff countered. "The five years I've been sheriff, we've taken the Broward Sheriff's Office to a new level. I've worked with some of the bravest people I've ever met. One person at this point, one person didn't do what he should have done and it's horrific."

After Israel insisted that he will not resign, despite calls for him to step down from Florida lawmakers, Tapper asked, "Do you think that if the Broward Sheriff's Office had done things differently this shooting might not have happened?"

"Well, if ifs and buts were candy and nuts," Israel began as an appalled Tapper cut him off with, "I don't know what that means."