'A disgrace': Dem rips Mulvaney over $30 million Trump parade that would fund food stamps for 20,000 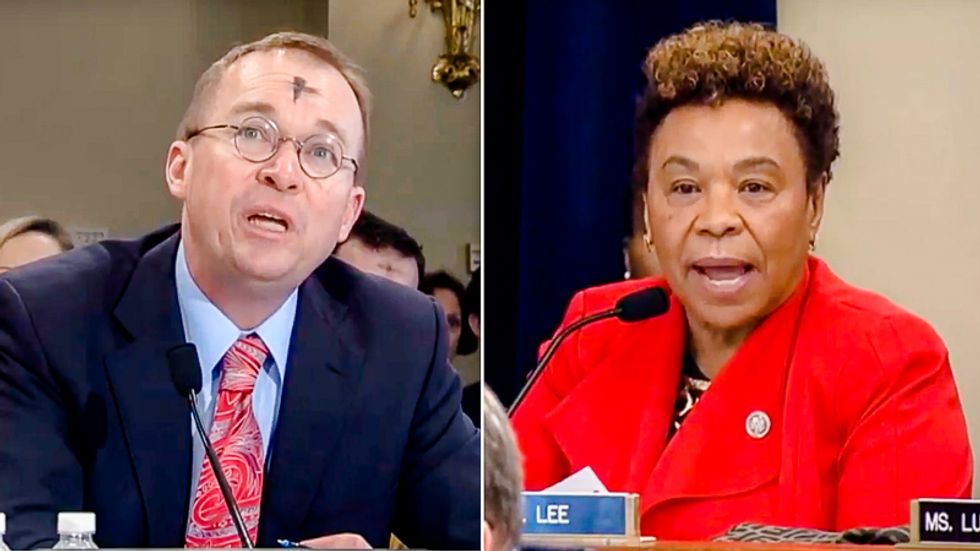 Budget Director Mick Mulvaney revealed on Wednesday that a military parade requested by President Donald Trump could cost as much as $30 million -- enough to fund food stamps for over 20,000 people each year.

At a House budget hearing on Wednesday, Rep. Barbara Lee (D-CA) noted that Trump's proposed budget cuts funds for some of the most vulnerable Americans.

"This budget is really shameful," Lee explained. "It dismantles our basic living standards that Americans have turned to for decades and pushes millions of people into poverty. It will destroy people's lives."

"It's hard to imagine how you could be proud of this budget," she said to Mulvaney. "Since these cuts are to pay for the tax cuts for the wealthy billionaires, millionaires and corporations. It's clear to me that you don't care about paying down the debt or the deficit because this budget really shows what this tax scam was all about."

"I've seen various different cost estimates," Mulvaney replied. "Between $10 million and $30 million depending on the size of the parade, the scope of it, the length, those types of things."

As for the budget, Mulvaney argued that it would not push people into poverty because he expected those people those people to find jobs.

"We see the best welfare program as a job," Mulvaney opined. "And we see the economy as a way to push people out of poverty, allowing them to lift themselves out of poverty."

Lee noted that she had been a SNAP recipient at an earlier time in her life.

"Because I needed that bridge over troubled waters," she explained. "It wasn't permanent. It was just so I could get through what I was going through."

"It's a way that you are trying to make sure people that are low income, that we don't believe that they have the dignity they deserve," Lee added. "The way you are trying to put SNAP into a box now. And I think it's a shame and disgrace that you're treating low income families in this manner."

According to the Center on Budget and Policy Priorities, the cost of a $30 million parade would be enough to fund food stamps for nearly 24,000 people for a year.