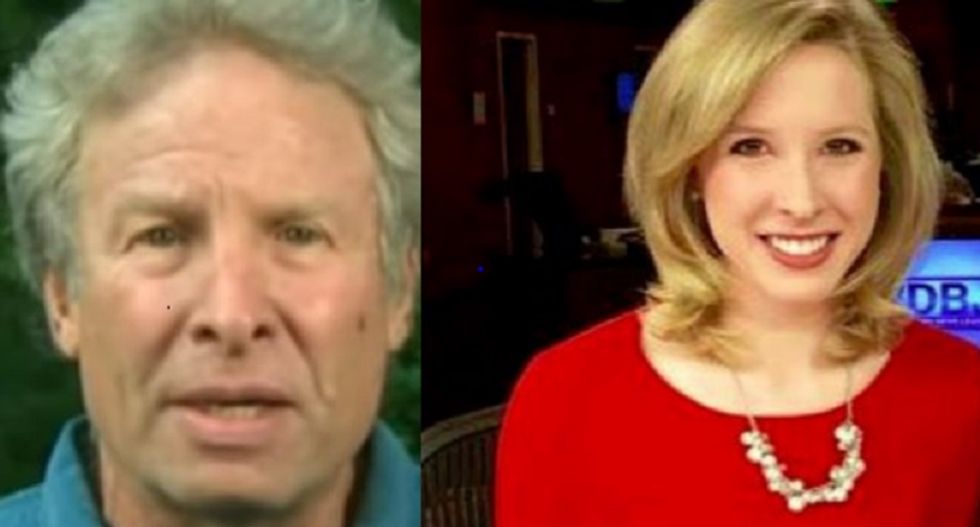 Appearing on CNN, the father of news anchor Alison Parker — who was shot and killed during a live report by a disgruntled and emotionally disturbed former colleague-- said to not to expect too much in the way of Republicans doing anything about guns after the Florida high school massacre based upon his fight for change since 2015.

Speaking with New Day host Alisyn Camerota, still grieving father Andy Parker said it is an uphill battle to get any legislation passed that restrict the sales of guns and that Republican lawmakers will lie to voter's faces in public -- then kill the bills in private.

'It's so sad to always have to see you in these circumstances," host Camerota began. "We all, of course, remember the case of Alison and that hideous crime that played out on TV. And I know afterward going to do whatever you could to stop other families from being victims of gun violence and being in your situation. so what's happened since Alison's death?"

"Yeah, here we are again," Parker replied. "My heart breaks for the families now part of this wretched club that nobody wants to join. But I think, to speak to your guests earlier, [former lawmakers] David Jolly and Jason Kander talking about Republicans not doing anything, they're absolutely right."

"This is something that I came to the conclusion of; trying to convince them to consider any sensible gun legislation is like talking to a wall," he continued. "We have to get them out of there and replace them with people who will consider incremental easy stuff that can be done."

"As for Congress and every Republican lawmaker in this country, maybe with the exception of Susan Collins, by and large, they're not going to do anything," Parker continued."I was testifying on an extreme risk protection bill that would have allowed law enforcement to recognize a dangerous individual and remove guns temporarily until somebody sorted it out -- a judge adjudicated a person and said, 'okay, this person is fit to carry a gun or not.' And perhaps had that law been in place, it would have saved Alison, or it could have would have prevented this tragedy from happening in Florida , when they said 'we're sorry for your loss' and immediately kill that bill among party lines."

Parker then recalled a recent hearing on gun restrictions following the mass shooting in Las Vegas.

"There was a young woman who was in Las Vegas who was in tears, testifying in front of the general assembly to ban bump stocks," he explained. "They said 'we're sorry for your loss.' Then they crafted their votes to make it look like they passed the bill -- then sent it to another committee where it died. They will not do anything."

Addressing GOP talking points that the shootings are a mental health issue, Parker was not having it.

"It is a red herring, Alisyn," Parker stated. "We're not the only people that have people that are mentally ill. No other civilized country in the world has the same problem we do. We have mentally ill people that can get access to weapons on of war like an AR-15. and you can't just say, 'well, it's a mental health problem.' And I find it -- it's ironic that the first thing that Trump did when he took office is make it easier for people with mental illness to obtain weapons."