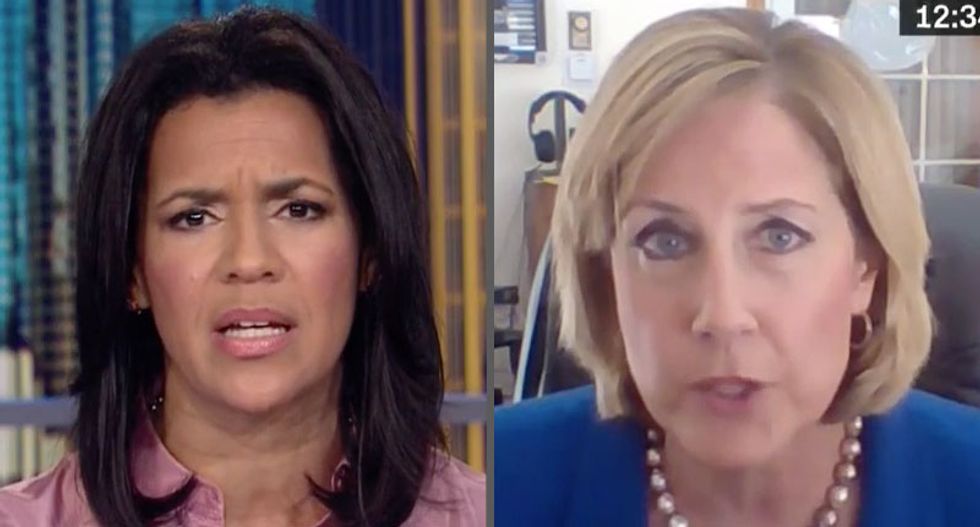 CNN anchor Fredricka Whitfield had to repeatedly push back against a first-term Tea Party congresswoman who was drawing inaccurate conclusions from a document she admitted she had not read.

"The indictments say there were Americans who were unwitting participants, the president continues to say there was no collusion," Whitfield noted. "How do you interpret these indictments?"

"Well, I think the indictments are instructive because what they show is the Russians really are trying to create some kind of chaos in our country," Rep. Tenney replied. "I think it's unfortunate that the Democrats are overreacting to this as far as, you know, really focusing on just Trump/Russia collusion, I think this doesn't say ..."

"Well," Whitfield interrupted, "it's the president who brought up the word 'collusion' actually."

"But actually, this has been going on for over a year that the Democrats have been trying to take down the administration claiming there was Russian collusion. I sat at the State of the Union address and listened to 'Russian collusion' being yelled out behind me from many of the Democrats," Rep. Tenney claimed.

"I think it's really clear from the indictment of whether the Department of Justice and others in the FBI, what they're saying is it was clear that they didn't affect the elections but they attempted to," she continued. "We've used millions of dollars and thousands of hours of time and wasted resources on investigating something that looks like it wasn't really there in the first place."

"Why aren't Democrats working together with Republicans to stop this instead of trying to create, what looks like an unending smear campaign," she continued.

Apparently Rep. Tenney, who is a lawyer, did not actually read the indictment before going on national television to answer questions about what it alleges.

"It is a 37-page indictment, I haven't read it all," Rep. Tenney admitted. "I'm skimming through it right now."

"I think that this is showing that there is clearly not collusion by the Trump campaign with Russian operatives to try to steal the election from Hillary Clinton," Rep. Tenney argued.