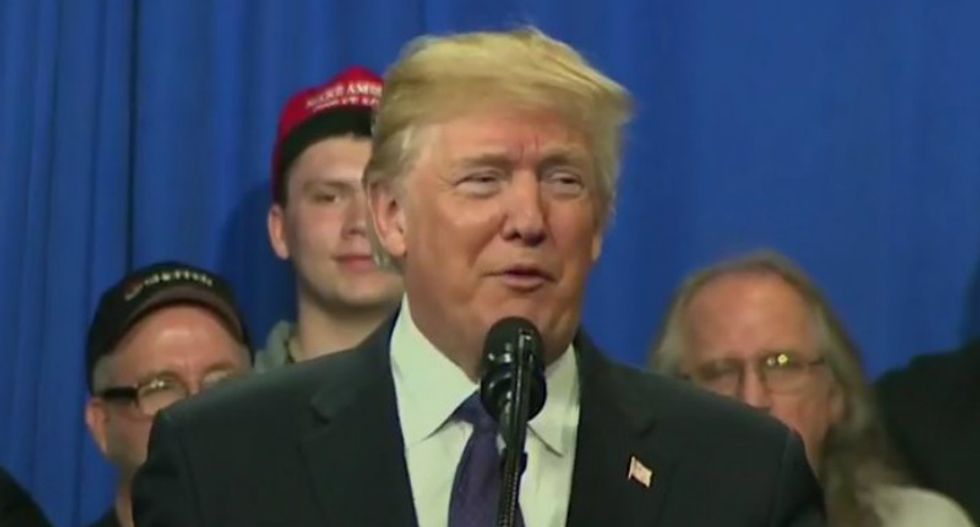 President Donald Trump during a tax reform speech in Ohio. Image via screengrab.

Wilson is a frequent Trump critic, but he wrote for The Daily Beast that the president had "cracked another seam in the foundation of our Republic" with his dark accusation during a "prissy, self-indulgent" speech in Blue Ash, Ohio.

"One thing we've learned in the last two years is that no legal, moral or cultural strictures bind Trump and that he is immune to the better angels of human nature," Wilson said. "The moral event horizon around him consumes the good in anyone who becomes one of his vassals. There is no better version of Trump, ever. He can only degrade and destroy everything he touches, but today was remarkable, even for him."

The treason allegation represented a "new low," Wilson said -- even for Trump.

"Trump lacks the mental capacity to see where this very slippery slope leads, but the political arsonists around him do," Wilson said. "With that, prepare to reap the whirlwind."

"Our Founders viewed treason as the most severe crime against the Republic," Wilson added. "Treason was an act without shades of gray, without gradations, without rationalization. It is the one crime we punish by stripping those found guilty of it of their citizenship, or even their lives."

Wilson argued the president was accusing his critics of treasonous activity of which Trump was himself guilty.

"If you're looking for someone who is betraying this nation, look for a person who would deliberately and systematically wreck the institutions that guarantee the separation of powers and the accountability of the executive and legislative branches," he said. "Look for a person who would suborn the rule of law to protect himself, his family, and his cronies from justice."

"If you're looking for someone in the act of betraying the glorious vision of our Founders and our Constitution, look no further than the vulgar, prancing, reality-show clown who holds the presidency," Wilson added.

He pointed out that Trump was perilously close to being brought down by legal violations that tiptoed up to the edge of treason.

"If it is treason you seek, look no further than a man who gladly allows Russia's continued attacks on our democracy, our Republic and our institutions," Wilson said. "Putin's implacable hostility, aggression and desire to divide and disrupt this nation are not in question by anyone except Trump and his most slavish sycophants. Putin's desire to weaken our standing, diminish our power and to harm our interests in the world is stated Russian policy, not speculations in the fevered minds of Never Trumpers."