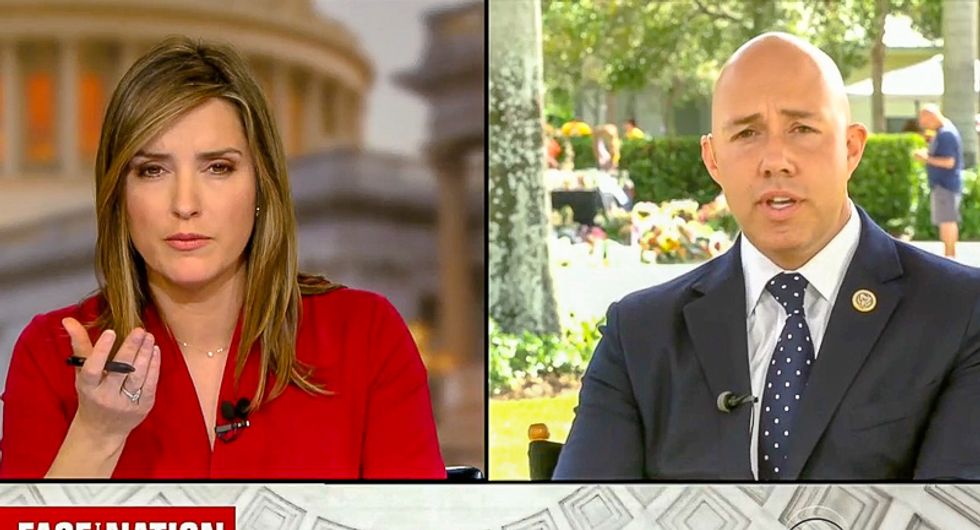 Republican Florida state Rep. Brian Mast revealed on Sunday that he had reversed his position on gun control and is calling for an immediate ban of AR-15s, the type of military-style assault rifle that was used to murder 17 at a school in Parkland, Florida.

During an interview on Face the Nation, CBS host Margaret Brennan noted that Mast had recently had a change of heart on gun control after the tragedy at Marjory Stoneman Douglas High School.

"We've seen a lot of shootings out there," Mast explained. "We've seen what's happened here in Parkland, we've seen what happened in Las Vegas, we saw what happened in Orlando. And for me personally, it pains me to know that I went out there willing to defend country, willing to give everything with almost the exact same weapon that's used to go out there and unfortunately kill children here in Parkland. And I think there's a very real opportunity here for response."

"That's what brought me to my change of heart," he added. "I just can't stand to see that personally."

Mast said that it was important to get President Donald Trump on board with the idea of a temporary ban on AR-15s.

"I can tell you as veterans and soldiers, when we see a chance to save life, we don't hesitate, we don't have a conversation," Mast said. "We go out there and do it. I think that's what [President Trump's] travel ban has been all about. It's been about saving lives in our community and in our country. Let's take that exact same model and apply it right now to this situation."

"Let's put that same kind of pause onboard right now," he continued. "Where we look at who's having access, what do they have access to, what were the failures that went on with the FBI and the AFT and other state agencies and in the states. Let's get back to the American people after this pause with sensible regulations, with sensible solutions."

Mast concluded: "It made sense in the case of terrorists coming into this country. I think it should make sense in looking at guns."