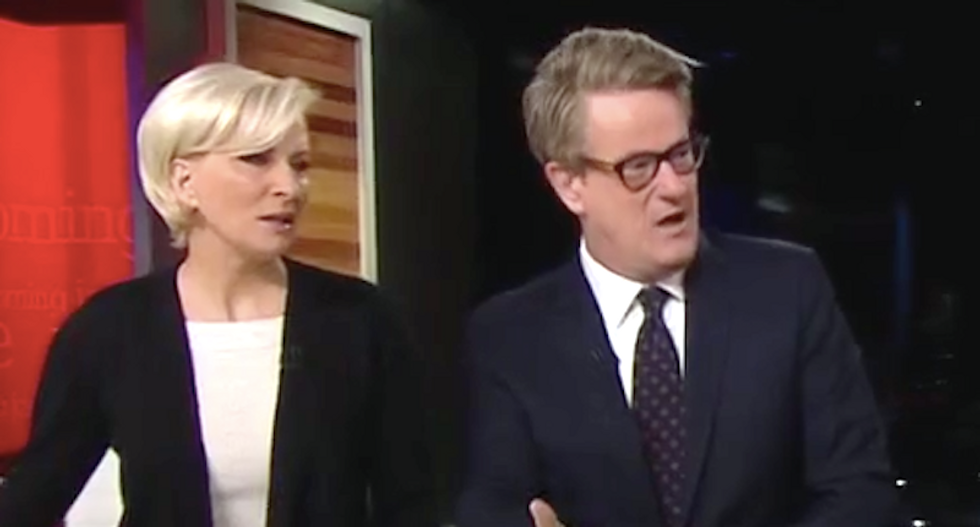 MSNBC's Joe Scarborough and Mika Brzezinski said the security clearance issue in the Trump White House was indicative of a larger problem with following rules and procedures.

The "Morning Joe" hosts and their guests discussed how son-in-law Jared Kushner still doesn't have a permanent clearance to view classified documents, and his situation has made it awkward for White House aides to bring up similar issues about other colleagues.

"The thing is, if it's Jared Kushner, obviously he's in the middle of an investigation right now," Scarborough said. "I think we can understand that one. I'm not justifying it, I'm saying that if it were just Jared Kushner then you could say, 'Okay, well, obviously there's a Russia investigation going on, this is going to be complicated until it's cleared up.' That doesn't account for the other dozen or so that are in there."

A dozen or more senior White House aides, such as the recently departed staff secretary Rob Porter, still don't have full clearance to access classified materials -- yet they continue to advise President Donald Trump on those matters.

"This is not just a problem with a son-in-law, this is a widespread systematic problem and again it goes to the heart of national security," Scarborough said. "It goes to people that may be seeing classified information that don't have the right to see classified information, and it is a hell of a lot more dangerous to America's national security, the possibilities, than secretary of state emailing other people with national security clearances a couple of documents that may have a 'C' written on it -- which, by the way, I said for a year and a half was pretty serious stuff."

Trump made Hillary Clinton's handling of classified materials a chief campaign issue, but Scarborough wondered why those two couldn't be fully trusted to protect the most secret intelligence.

MSNBC's Sam Stein joked that it was time for millennials to take over, and the 54-year-old Scarborough agreed.

"If a millennial runs, I'm voting for them," Scarborough said. "We can't get Baby Boomer presidents behind us fast enough."

Speaking on MSNBC this Monday, Yale Law School lecturer Linda Greenhouse addresses Supreme Court Justice Clarence Thomas' opinion in the wake of the Court's reversal of Roe v. Wade, where he wrote that the court must revisit past landmark decisions.

Thomas, one of the most conservative justices on the court, wrote that "in future cases" also involving privacy "we should reconsider."