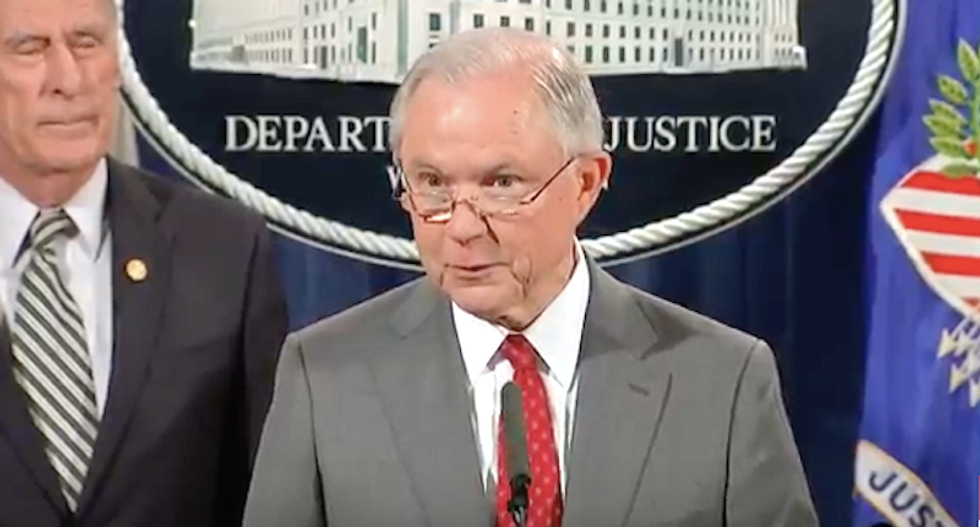 In response to Trump's Wednesday morning tweet calling him "DISGRACEFUL," Sessions said that he was confident that his office was acting appropriately -- and he said that he would continue to "discharge my duties with integrity and honor" as long as he served as attorney general.

Sessions also said that the Department of Justice would "continue to do its work in a fair and impartial manner according to the law and the Constitution."

“Why is A.G. Jeff Sessions asking the Inspector General to investigate potentially massive FISA abuse,” the president asked on Twitter Wednesday morning. “Will take forever, has no prosecutorial power and already late with reports on Comey etc. Isn’t the I.G. an Obama guy?”

Trump then trashed Sessions for not directing his own attorneys at the Department of Justice to investigate Obama themselves.

“Why not use Justice Department lawyers?” he asked. “DISGRACEFUL!”

Trump has not been shy about ripping into his own attorney general for not doing enough to investigate his political foes. Last week, Trump on Twitter told his followers to ask Sessions — whose name the president initially misspelled as “Jeff Session” — why Democrats weren’t being investigated for “crimes” related to Russian meddling in the 2016 presidential election.

And last summer, Trump called Sessions “beleaguered” and “weak” because he was not sufficiently investigating former Democratic rival Hillary Clinton over her use of a private email server during her tenure as secretary of state.

Trump has also raged against Sessions for recusing himself from overseeing the probe into Russian interference in the 2016 presidential election after it was revealed that Sessions falsely told the Senate during his confirmation hearing that he had never met with any Russian government officials during the campaign.