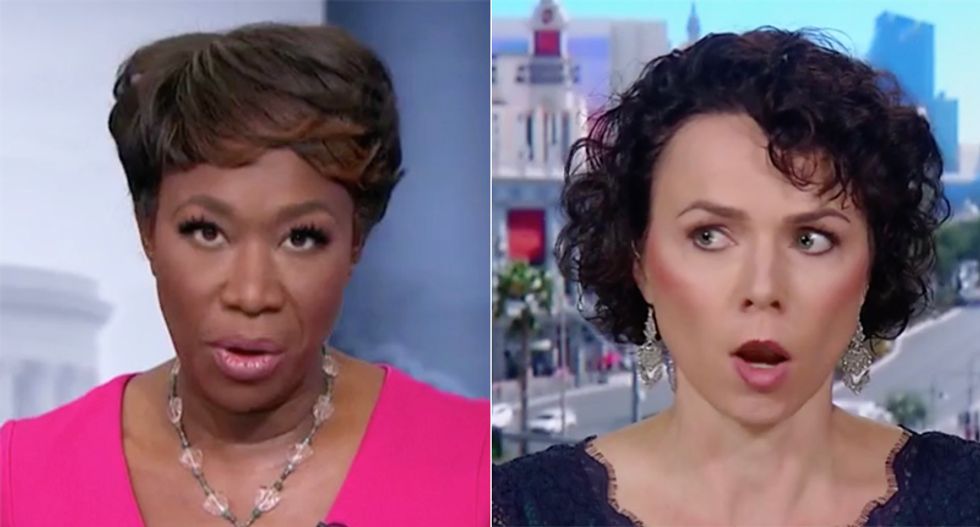 In what turned into a rowdy panel session made up of three female conservatives discussing sexual abuse at the White House, MSNBC host Joy Reid stumped one defender of Donald Trump by asking her to name one time the president stood up for a woman accusing a Republican of sexual assault or abuse.

Speaking with former Nevada Republican Party chair Amy Tarkanian, the AM Joy host listed off Trump associates who have been accused of abuse, then pressed her to explain why Trump is drawn to them.

"If it was just Rob Porter, you know, General Kelly knew about this last fall," Reid began. "Seeing that photo one would think if you're a person of conscience, that photo alone would give you pause about having them stay in place. But you haven't had just Rob Porter. Donald Trump himself multiple times has been accused of sexual misconduct."

"Steve Bannon and Andrew Puzder, who had to withdraw as the nominee for Secretary of Labor, and David Sorenson, the speechwriter that is now gone," Reid persisted. "You have Steve Wynn, the finance chief of the RNC. It goes on and on and on. I guess my question to you as a woman, as a Republican woman: what does it say to you that your party is cultivating so many of these men and Donald Trump defends them all?"

"Well, I don't know if he necessarily defends them all, he says lives are being destroyed," Tarkanian deflected before adding, "Who's he defending? He said you need to be careful because a lot of these -- these are allegations not everyone has been found guilty. You have to be careful."

"Donald Trump doesn't seem to be a problem with the Republican ones, right?" Reid pressed.

"I wouldn't say that. I would hope that --," Tarkanian attempted before the AM Joy host cut her off.

"Well, when has he ever stood up for women against an abusive man?" Reid persisted. "Can you name any instance when he stood up to a Republican man accused of abusing women, just one?"

"I don't talk to him on a regular basis," Tarkanian replied with a nervous laugh but was unable to provide a name.

"This is the problem," conservative columnist Jennifer Rubin blurted. "You have women like Amy go on television and defend the president. And he seizes upon this and his supporters seize upon this and the pattern repeats itself because they get away with it. As long as you have Republican women like Amy, like Concerned Women for America, who want something out of this president whether it's judges or whether it's discrimination against gays, whatever it is that they want -- they make excuses for him and they have to stop it."