In politics, speeches matter – but even Donald Trump couldn't make the State of the Union watchable 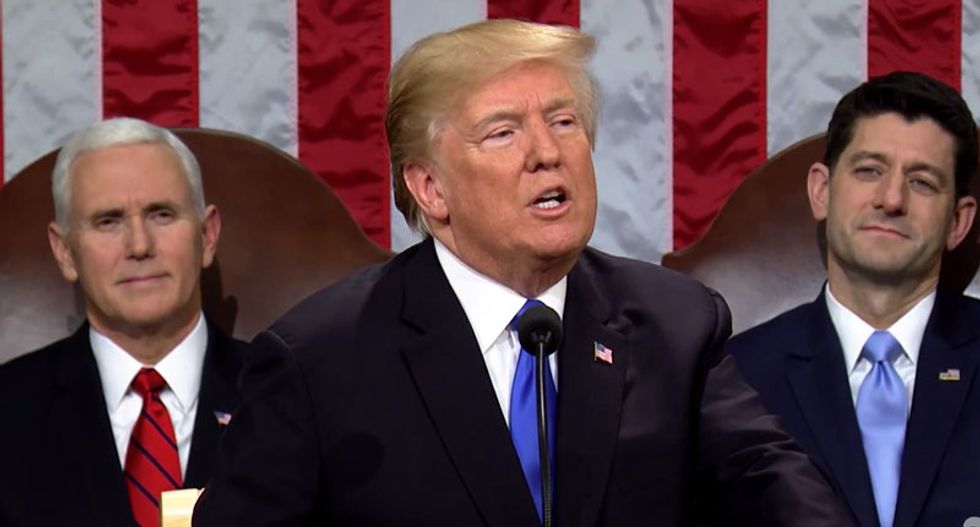 People like to argue that there is too much performance in politics – that especially in the era of Donald Trump, political coverage is fixated on personality at the expense of policy. Hillary Clinton, for instance, was often roundly decried as a terrible campaigner, but credited with the requisite experience and policy chops to become a highly effective president.

But politicians’ performances aren’t just embellishments or distractions from more serious business. Politics in representative democracies cannot be reduced to the minutiae of policy. Because politicians are entrusted to work on their constituents’ behalf, they have to strike some sort of affective connection with them – yet nation states are vast, and we’re unlikely to be personally acquainted with our senior political representatives.

This is especially true of a polity as large as the US. At the federal level, and most acutely in the case of the president, public performance plays a crucial role in forging trust. On the other hand, because we are asked to invest a politician with our trust, we are just as likely to question whether they are deserving of the confidence we place in them. This connection is akin to the suspension of disbelief we need to get emotionally invested in the fictional action of a film or play, but the stakes are higher: unlike actors, who can leave one character behind and play another, politicians have to convince us that they really are as they appear to be.

Speeches are a crucial vehicle for forging this delicate, emotional bond between the president and the people. Many of the former White House speechwriters I’ve interviewed in my research link the importance of speeches to storytelling. As one of them told me:

I can list for you ten reasons why a policy is good, but if I tell you a story about a human whose life has been affected [by it], that’s just how we’re going remember things, how we’re going to be convinced of things. And because speeches are the one place in our communications mix where stories are best told, if they’re not told there, they’re not told anywhere.

Speeches do something that other communications strategies cannot do: at their best, they forge human connections through an extended, emotionally resonant engagement with a subject. As another speechwriter put it: “A great speech can change a career, it can change people’s way of thinking, it can change the debate entirely. A tweet is not going to do that.”

Paradoxically, the significance and career-making potential of speeches does not mean that what’s heralded as the most important speech of the year is also the most impactful. In fact, presidential speechwriters know that the State of the Union address is at cross-purposes with the best use of speeches.

On this, former White House speechwriters from both parties can agree. As one said to me in our interview:

It’s the worst speech we have to write all year. It’s one that doesn’t sound like [the president], because it has 70 different policy proposals in it.

Others went even further:

The standout moments from State of the Union addresses are deviations from conventionality. George H.W. Bush opened his 1992 address with a volley of self-deprecating jokes. Barack Obama ad-libbed a dig at the Republican party in 2015. In response to Republicans applauding his statement that he would run no more election campaigns, Obama countered: “I know, ‘cause I won both of them.”

And yet the State of the Union, which has been delivered in person since Woodrow Wilson was president, has become a near-unshakeable convention. Donald Trump’s speech this week was characteristically ill-wrought; Jeff Shesol, formerly a speechwriter in Bill Clinton’s White House, notes Trump’s bad metaphors in The New Yorker. But Trump’s address was also conventional, making every attempt to get this most “unpresidented” of presidents to sound presidential.

Trump began on a measured, bipartisan note, even extending this to his trademark “Make America great again”, sounding it in a matter-of-fact rather than swaggering tone. He name-dropped a coast guard officer and a firefighter, a well-worn device to liven up a stale speech that hints at storytelling but lacks the narrative arc that would build and sustain engagement. Then followed a long list of the Trump administration’s achievements (fact-checked by the New York Times) and appeals to the American Dream.

If the tone of the speech was an exercise in constraint – Trump only seemed to get fired up when, in a call to limit immigration, he spoke about gang members murdering teenagers – its length, as ever, made it an exercise in endurance. Clocking in at around an hour and 20 minutes, the State of the Union address is thoroughly out of step not just with the best purposes of speeches, but also most people’s attention spans. Yet even bad traditions can endure – and it is telling that even a president infamous for his inability to focus could be forced to follow this one.

By Julia Peetz, PhD Researcher in Performance and Politics, University of Surrey