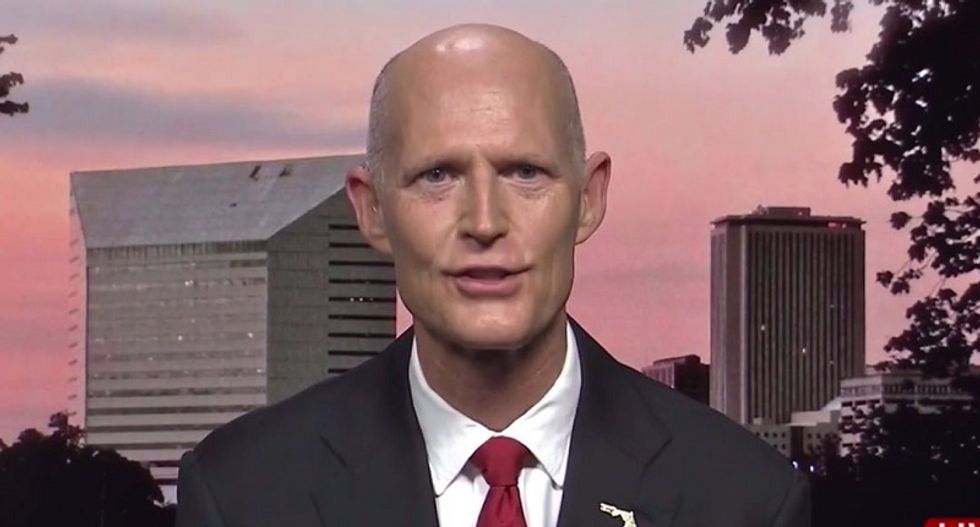 In a Thursday interview with CNN's Wolf Blitzer, Gov. Rick Scott (R-FL) said that he's ready to do anything to guarantee that shootings will no longer happen in his state. However, when he was pressed on it, he caved.

"Let me phrase it another way because this is really shocking to so many of us, governor," Blitzer said. "He wasn't old enough to buy a beer legally in your state, you've got to be 21 years old. So, why is it in Florida he could buy an assault weapon at the age of 18?"

Scott said it's something they have to "look at" and that their goal is "school safety."

"We have to go back and look at these things and say to ourselves, 'our primary goal is school safety,'" Scott said "And so, you know, that's -- you know, I want to make sure we don't ever trample on anybody's constitutional rights, but we've got to focus on keeping these kids safe."

Blitzer noted that the shooter would not have been able to kill as many people with another gun, but that the Colt AR-15 enabled him to shoot several rounds without having to stop.

Blitzer pressed Scott on that promise. Citing the shooting in Orlando at the Pulse nightclub and the Ft. Lauderdale airport, the CNN anchor asked what he actually intends to do.

"It's not that complicated, right?" Blitzer asked. "You've just got to pass some new laws to make it more difficult for 18-year-olds to buy assault weapons, right?"

That's when Scott began to backtrack.

After watching a grief-stricken mother screaming into CNN cameras demanding action from President Donald Trump, Scott said again that he was willing to do anything.

"You've got to say, we got to do everything we can to make sure this doesn't happen," he said. "You know, one, we are -- I've already talked to my Senate president and speaker. I've asked for funding for school safety. They said they're going to be committed to working with me to put more money into school safety in our state. we've got to figure these things out. We cannot -- we cannot let this pass without making something happen that hopefully -- it is my goal that this will never happen again in my state."

Blitzer pressed again asking what he actually intends to do.

"I just want to pin you down on this governor, because I've known you for a long time," Blitzer said. "The president of the United States spoke for about seven minutes. He didn't mention the word 'gun' even once. Are you ready to commit your political team to work to tighten gun control, gun restrictions, in the state of Florida?"

"I'll be stronger than that, Wolf," Scott pledged. "Everything's on the table. I'm going to look at every way that we can make sure our kids are safe."

But Blitzer pressed him on it again.

"Even if the National Rifle Association goes after you?" he asked.

"Including gun control?" Blitzer followed up.

"Wolf, I'm going to do -- it's a lot of things," Scott said, beginning to find other things to blame for the shooting. "It's looking at, you know, who should have guns. Should individuals with mental illness have guns. Should -- what can we do to create more safety in our schools? What can we do to make it easier for our children and make them feel comfortable to report things? It's not one thing. It's all these things put together."

At no point did Scott say the phrase "gun control" or agree that he was willing to pass gun safety laws.