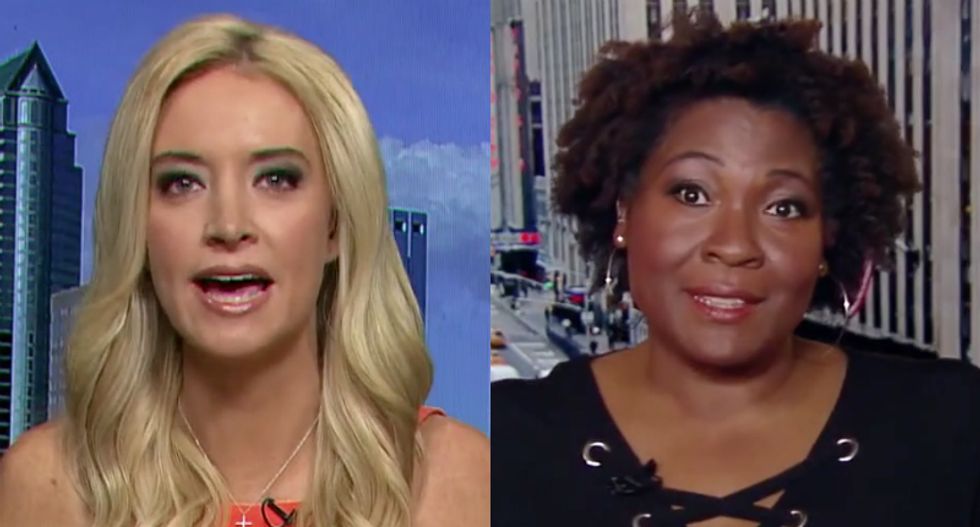 A Republican National Committee spokeswoman on Friday insisted that special counsel Robert Mueller's bombshell indictments of over a dozen Russian individuals proves beyond doubt that the Trump campaign didn't collude with the Kremlin — and a Democratic operative immediately swatted it down.

The spokeswoman argued that because the Russian election-meddling efforts included organizing for Bernie Sanders and against Donald Trump, there's no way the president or his campaign could have had anything to do with it.

Jehmu Greene, a former candidate for chair of the Democratic National Committee, responded by citing host Melissa Francis' own words: that the news is "a big deal."

Greene went on to say that she hopes the president will adequately address the American people and acknowledges the Russians' successful attempts to meddle in our elections — an assertion McEnany protested against.

"First of all the president has said yes, the Russians have meddled in our election and it's a very serious thing," she claimed. "Yes, he has said that. That is documented, that is accurate."

Though the president has tweeted at least once acknowledging Russia's electoral interference, CNN reported just three days ago that Trump remains unconvinced of the Kremlin's attempts to influence the American election, as per sources familiar with his thinking.

The RNC spokeswoman then accused Greene of "missing" the day Trump admitted the election-meddling happened and charged her with attempting to mislead Fox News viewers.

After the host attempted to mediate between the two guests, Greene used their on-air fight to illustrate just how well the Russians sowed discord in American politics.

"If it's working in this conversation, what do you think it did in the 2016 election?" she mused. "It worked. And that is the reality that is going to be hard to swallow."

"I get it, Kayleigh," Greene mocked. "I'm not feeling for you because I'm not putting party first."