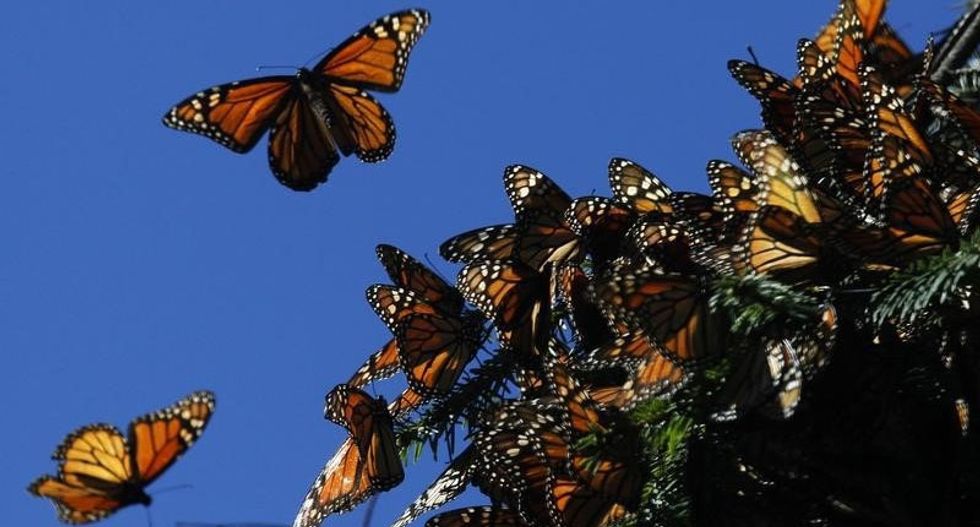 Monarch butterflies fly at the El Rosario butterfly sanctuary on a mountain in the Mexican state of Michoacan November 27, 2013. REUTERS/Edgard Garrido

The number of monarchs wintering in California has dropped to a five-year low, despite more volunteers counting more sites in search of the orange-and-black insect that is arguably the most admired of North American butterflies, a report said on Friday.

The latest tally of 200,000 monarchs in forested groves in California's central coast has dropped from the 1.2 million counted two decades ago, indicating the number of butterflies found west of the Rocky Mountains, or the so-called western population, continues to sharply decline, the Xerces Society for Invertebrate Conservation said in a report.

Western monarchs are born on milkweed plants in such states as Arizona, Idaho, Utah and Washington before embarking on a seasonal migration to California.

The annual count in California, done at the end of autumn by dozens of volunteers and scientists, last saw a severe low in 2012, with 144,812 butterflies across 136 sites, she said.

In another troubling trend, the 200,000 butterflies found in the 2017 survey stemmed from monitoring of 262 sites, which were even more sites than were tracked the previous year when 300,000 monarchs were counted, Jepsen said.

Factors that may have compounded monarchs' plight in California in recent months include unseasonably warm temperatures, wildfires, smoke from wildfires and mudslides, all of which may have played roles in reports of monarchs migrating and breeding later than usual, she said.

While much is known about the decades-long population decline of monarchs in the eastern and central United States, which number in the tens of millions and which winter in Mexico before winging north in a famed mass migration, scientists have only recently been able to track the western variety due to new statistical models.

Scientists believe declines in both U.S. monarch populations are linked to human development that has seen the destruction of roosting trees in California and Mexico, climate change and farmers' increasing use of pesticides that kill the milkweed plants butterflies depend on for reproduction and food.

The U.S. Fish and Wildlife Service is considering adding monarchs to the federal list of endangered and threatened species.

A 2017 study funded by the agency found that the western population has a 63 percent chance of extinction in 20 years and an 84 percent chance in 50 years if current trends continue.

(Reporting by Laura Zuckerman in Wyoming; Editing by Himani Sarkar)