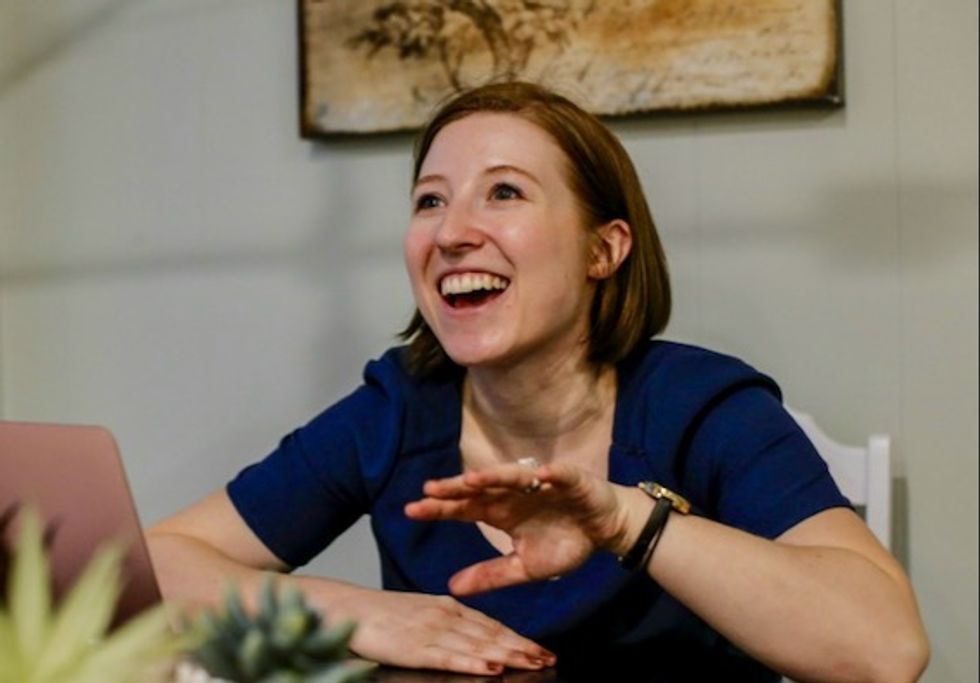 From a retired Navy pilot to a millennial web developer and an award-winning romance novelist -- US women are running for office in record numbers, propelled by anger against Donald Trump to redress chronic inequality in political representation.

Women, who currently make up only 20 percent of Congress, will be a driving force in November's mid-term elections, as Democrats are determined to flip the Republican majority and deliver a bloody nose to a president they detest.

"I have been active for 30 years, I've never seen anything like it," said Patti Russo, executive director of the Women's Campaign School at Yale University, which has been training women to run for office for a quarter of a century. "It's exhilarating."

From Trump's shock win in November 2016 and the women's march on Washington in 2017, to the #MeToo sexual harassment watershed, state ballots last year and Trump's State of the Union this January, the phone has been ringing off the hook.

The Center for American Women and Politics at Rutgers University says twice as many women are on track to run for Congress in 2018 compared to 2016 -- 437 for the House of Representatives and 51 for Senate. Most of them are Democrats.

They are outraged that a man with zero political experience who boasted of groping women could win the highest office in the land. They are angry that Hillary Clinton, often reputed to have been the most qualified candidate in history, could lose.

Women, particularly Democrats, say women's rights are under attack, mobilized by efforts to repeal the Affordable Care Act, fired up by Trump policies on everything from gun control to the environment to throw off shy, retiring stereotypes and step forward.

Emily's List, which works to elect Democratic women who support the right to abortion, says more than 30,000 women have contacted them about their interest in running for office since Trump's election. They've hired new staff and knocked down a wall in their office to make room.

A generation ago, women were typically in their mid-40s before contemplating a run for office. Today, the median age is early 30s.

Lindsay Brown, a 29-year-old web developer, may buck the trend in being a Republican but otherwise personifies much of the mood -- contesting, as a feminist and a progressive, fifth-term incumbent Congressman Leonard Lance in her New Jersey district.

"My mom was just shocked," said Brown. "But she's so excited and so proud."

A year on, with just a handful of unpaid volunteers, no campaign manager and $3,300 in donations, she needs to collect 200 signatures to file her candidacy for the Republican primary in April. So far, she has just 20.

By comparison, Democratic candidate and former Navy pilot Mikie Sherrill from a nearby New Jersey district has raised $42,000 online this month alone.

"Pragmatic" about her chances just eight years out of college, Brown is no less driven.

If she manages to pull off the impossible, she will be the youngest person ever elected to Congress. If she doesn't, she'll run next time. "I'm way too entrenched now, there's no way there's ever going to be a normal life again."

"Millennials," she told AFP at her home in Clark, New Jersey, surrounded by her two rescue dogs and three cats, "are the largest voting bloc right now and we are not represented in most levels of government."

Nearly 80 women are expected to run for governor this year, smashing the previous record of 34 in 1994. Only six of the current 50 governors are women.

In Georgia, Stacey Abrams, a businesswoman, lawyer and author of eight suspense novels, is hoping to break the gubernatorial glass ceiling for black women.

But not all newly politically engaged women are running for office. Black women voters were instrumental in Democratic victories in Alabama and Virginia last year, galvanized by national discourse around race and nativism.

Women are also focused on fundraising for the mid-terms. "It's literally the only thing we can talk about and how we can squeeze every single dollar out," former model Carin van der Donk told AFP in New York.

A mother of two, she used to have a fair-trade organic business for children, but kept out of politics -- convinced that, like money, it was not conversation for polite society.

When Trump won, Van der Donk said she "went on a hunger strike for 10 days."

Now, she is out four nights a week at political meetings. "We haven't been forceful enough as women. We need to literally push our way to the front for things to happen," she said.