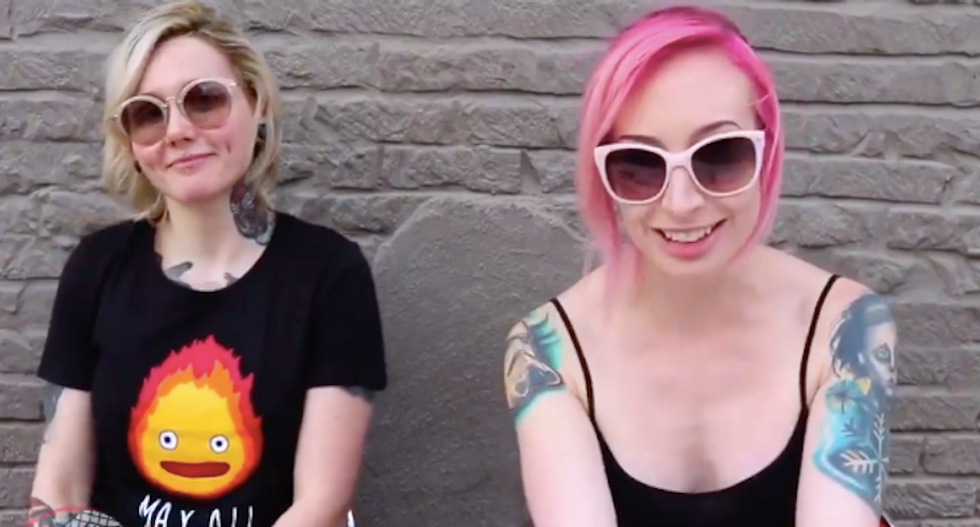 Several exotic dancers in Nashville tried to prove a point about easy access to deadly weapons -- and drew complaints from a NRA-backed Republican candidate.

Dancers from Déjà Vu Showgirls set up a booth Tuesday near their club with a sign offering "Couch Dances: $15. AR-15: $1,100," reported WSMV-TV.

The women wanted to show that it's easier to buy a military-style rifle -- which requires no background check, waiting period or license -- than get a job as a nude dancer.

“You have to get a background check, fingerprinted, and show two passport photos,” said one dancer, who gave her name as Mary Jane.

The dancers said regulations enforced by Metro's Sexually Oriented Business Licensing Board grow stricter for them each year, even as lawmakers try to undo restrictions on buying or carrying guns.

“It is kind of scary, especially with so many mass shootings going on that it is that easy for anyone to obtain it,” said club manager Codi Kent, who added that police stopped by and made clear their demonstration was "completely legal."

The women weren't actually selling a gun, simply trying to make a political point -- but their demonstration angered a former state lawmaker who's now running for the Tennessee Senate.

“All stunts are meant to generate publicity, and I think this is kind of tragic with what happened in Florida in the school down there and what has happened in a number of schools over the past few years," Republican candidate Joe Carr told the TV station. "It should not be minimized by sensational antics by a handful of women in front of a gentleman's club."

Carr has apparently changed his tune since June 2016, when he gave away an AR-15 rifle like the one used to kill 49 people and wound 53 others about three weeks earlier at a gay nightclub in Orlando.

The Tea Party candidate, who had drawn an "A" rating from the NRA as a lawmaker, was running an ultimately unsuccessful congressional race against Rep. Diane Black (R-TN) and said the giveaway was a protest against the U.S. Supreme Court rejecting a legal challenge to a state assault weapons ban.

“We are one administration away from losing our Second Amendment rights,” Carr said at the time. “While the current administration, Hillary Clinton and those on the left continue to disarm America, I will not sit quietly, and that is why I am featuring our Elite Arms AR-15 drawing.”