’Suck on that one, bud!’: Watch Trump-loving preacher’s rant against ‘masculinity’-lacking of Parkland students 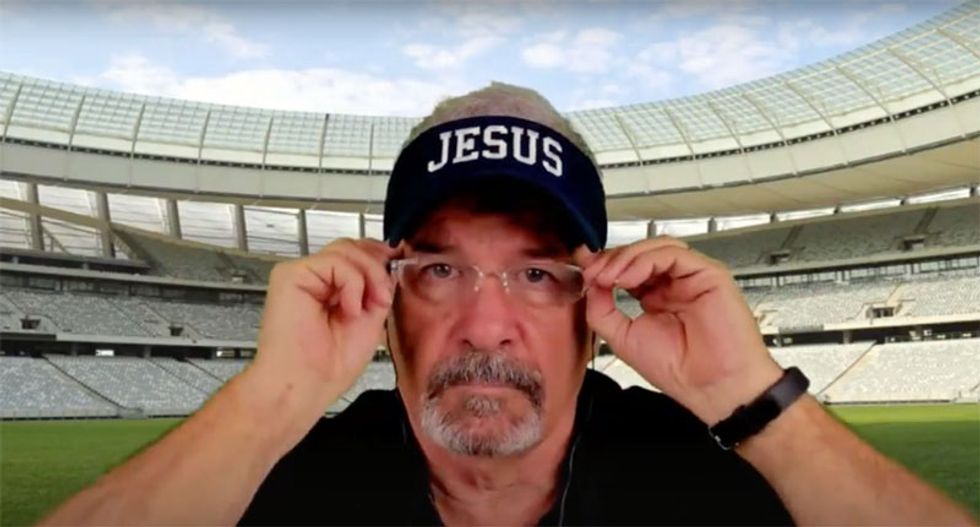 Daubenmire was an unsuccessful Tea Party candidate for Congress and is a prominent defender of President Donald Trump.

“This will sound horrible, but I have to say it,” Daubenmire stated on his "Pass The Salt Live" webcast.

“Instead of the aftermath of these shootings in Florida being, ‘Hey, dude,’ where young guys are saying to each other, ‘I’m gonna learn to fire a gun, I ain’t ever gonna let this happen again, I’m gonna learn to fire a gun,’ instead the reaction is, ‘Oh, please take the guns away.’ The exact opposite message! Meet power with power! That’s manhood, masculinity!" Daubenmire preached.

“Most guys don’t have the stones to stand up and say, ‘I don’t care what you say! It don’t bother me! Here’s what I think! Suck on that one, bud!'” Daubenmire shouted.

On its website, Pass The Salt says it was started "to encourage the Body of Christ to step into the cultural war."

"By taking the fight to the enemy Coach Daubenmire has become a recognizable voice with the media as he is an unashamed, articulate, apologist for the Christian worldview. Coach’s willingness to stand with Judge Roy Moore in Alabama, Terri Schiavo in Florida, and the 10 commandments in Washington DC, has enabled him to partner with some of the nationally known voices in America," they noted. "Coach is using his knowledge of education and educational issues to equip Christians to defend the Judeo-Christian worldview."