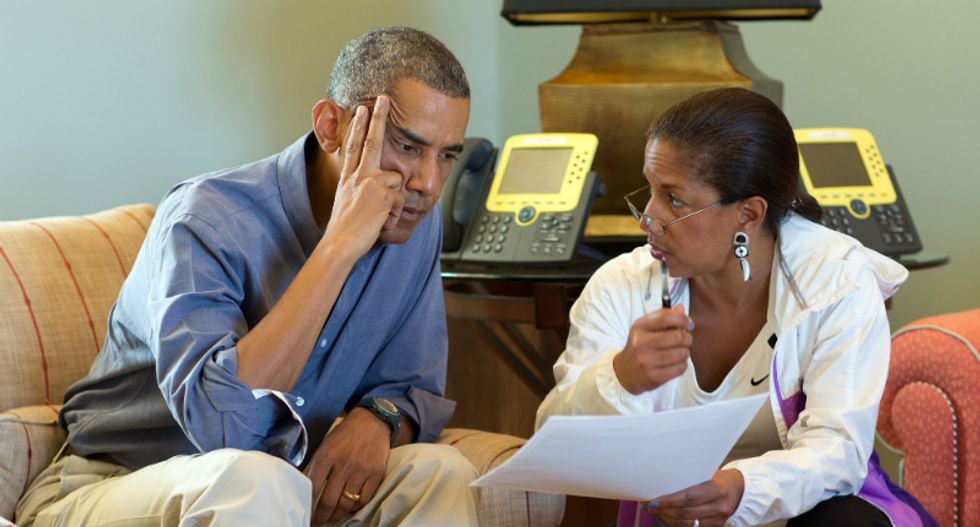 Former national security adviser Susan Rice on Friday responded to Republican allegations that she and former President Barack Obama discussed the infamous "golden showers" dossier just before the end of his administration.

The Atlantic's Natasha Bertrand reported that Rice's attorneys sent a letter to Senate Judiciary Chairman Chuck Grassley (R-IA) and Sen. Lindsey Graham (R-SC) with further context on a January 5, 2017 meeting between the adviser and outgoing president.

Earlier in February, Graham and Grassley flagged the existence of an "unusual" memo Rice sent to herself on January 20, 2017 about the meeting weeks prior. It detailed a meeting she had with President Obama and former FBI director James Comey about intelligence regarding then-president-elect Donald Trump and Kremlin-linked operatives. She stressed in her memo about the meeting that Obama intended to pursue the investigation into the Trump-Russia connection "by the book."

"It strikes us as odd that, among your activities in the final moments on the final day of the Obama administration, you would feel the need to send yourself such an unusual email purporting to document a conversation involving President Obama and his interactions with the FBI regarding the Trump/Russia investigation," Graham and Grassley wrote to Rice on February 12.

They further alluded to allegations that the FBI pursued biased investigations against Trump, a charge based on a dossier written by former British spy Christopher Steele for the Fusion GPS research firm alleging Trump's ties to Russia.

In her rebuttal, the former national security adviser's attorneys said that "in the conversation Ambassador Rice documented, there was no discussion of Christopher Steele or the Steele dossier, contrary to the suggestion in your letter."