Televangelist Benny Hinn admits he was wrong about the prosperity gospel: ‘Did Jesus live in a mansion?’ 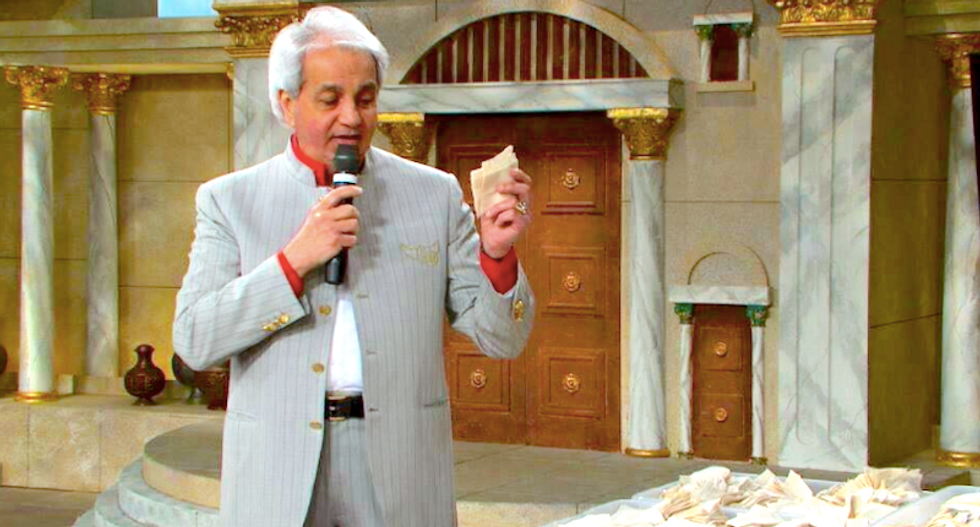 A faith-healing televangelist has confessed he was wrong in preaching the "prosperity gospel."

Benny Hinn, who was questioned by U.S. senators over his extravagant lifestyle, said the death of evangelist Billy Graham had caused him to reflect on his own ministry, reported the Christian Post.

"I think some have gone to the extreme with it, sadly, and it's not God's word what is taught, and I think I'm as guilty as others," Hinn said in a Facebook Live broadcast. "Sometimes you go a little farther than you really need to go, and then God brings you back to normality and reality."

The 65-year-old pastor said Wednesday that he still believed the Bible justified his teachings, but he admits to promoting a flawed interpretation he learned as a child growing up Christian in Israel.

"The more you know the Bible the more you become biblically based and more balanced in your opinions and your thoughts because we are influenced," Hinn said. "When I was younger I was influenced by the preachers who taught whatever they taught. But as I've lived longer I'm thinking, 'Wait a minute, you know this doesn't fit totally with the Bible and it doesn't fit with the reality.' So what is prosperity? No lack. I've said this before."

Hinn said he misinterpreted what the Bible meant by "no lack."

"Did Elijah the prophet have a car? No, did not even have a bicycle. He had no lack," Hinn said. "Did Jesus drive a car or live in a mansion? No, he had no lack. How about the apostles? None lacked among them. Today, the idea is abundance and palatial homes and cars and bank accounts. The focus is wrong -- it's so wrong."

Hinn's World Healing Center Church and Joyce Meyer Ministries were the only two ministries that fully cooperated with the Senate investigation, which found no definitive evidence of wrongdoing, and his churches also implemented financial reforms.

"I mean, forgive me," Hinn said. "People have accused me of things that aren't even real. One guy wrote a comment, 'Oh, he's worth $40 million.' Oh, how I wish! I would give it all to the Kingdom before God Almighty."

"'Well, he flies private jets,'" he added. "No, I don't. I have not flown private in dear God years. I fly commercial just like anyone else."

He said too many Christians mistake their own desires for God's will.

"We all sadly make the mistake of thinking that this is what God wants, and God says, 'No, that's not what I want,'" he said. "It's time to live biblically. You know it all comes down to one thing: Do we love Jesus, yes or no? If we love Jesus then it's all about Jesus. If we don't love Jesus, then it's about other things."