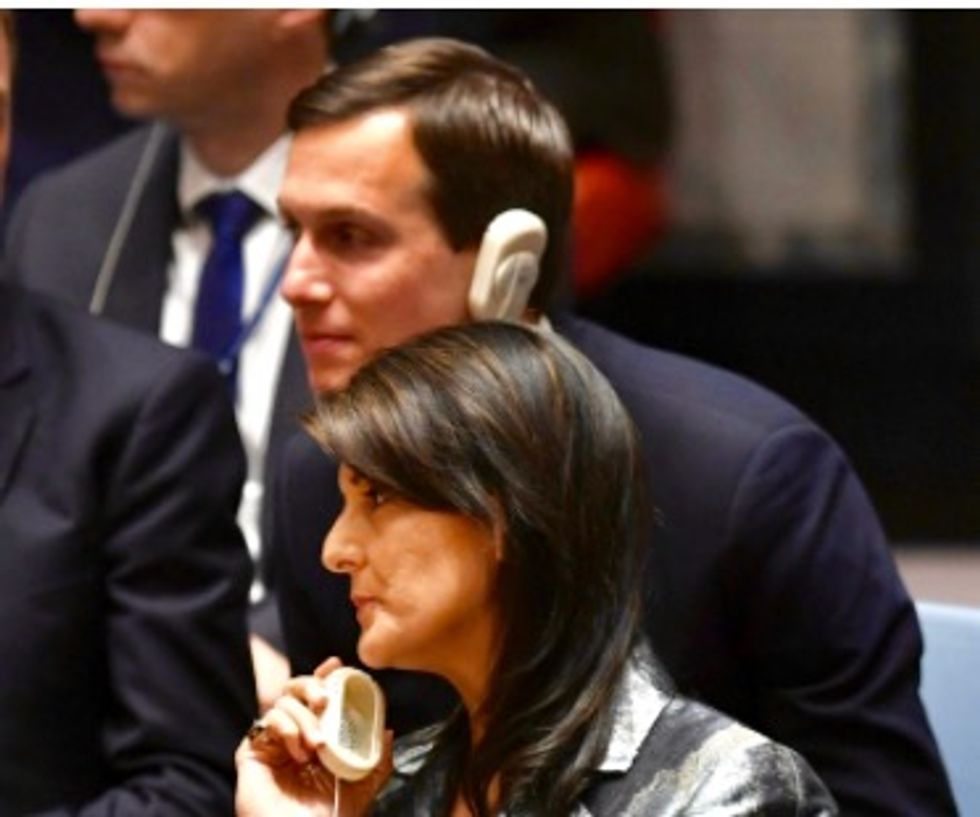 Nikki Haley, US ambassador to the United Nations, and Jared Kushner, US President Donald Trump's son-in-law, listen to a speech by Palestinian leader Mahmud Abbas at the United Nations Security Council on February 20, 2018 AFP / TIMOTHY A. CLARY

Jason Greenblatt, the US envoy for Middle East peace, and Jared Kushner, Trump's son-in-law and adviser, met behind closed doors with the ambassadors on Tuesday.

The council had just heard Palestinian leader Mahmud Abbas call for an international conference to be held by mid-2018 to launch a wider peace process in which the United States would not have the central mediating role.

During the one-hour meeting, the envoys did not share details of the Trump plan nor did they indicate when the US administration planned to unveil its proposals, diplomats said.

"They asked for support at the time the plan comes out," said a diplomat, who asked not to be named. Another diplomat confirmed that Greenblatt and Kushner had made the request, even though no details of the plan were shared.

French Ambassador Francois Delattre said the US administration was signalling its willingness to engage on the Middle East peace process and its respect for the Security Council by dispatching the two US envoys.

"They talked about the progress in their efforts and contacts, and this was useful," said Delattre.

While France said it would consider Abbas' proposal for an international conference, Delattre stressed that the United States plays an "indispensable" role in the search for an Israeli-Palestinian peace settlement.

A Security Council diplomat separately stressed that the "next step" will be the US peace proposals, adding "we are going to see if the Palestinians push really on that."

The Palestinians want a new international mechanism to shepherd peace talks after Trump decided to recognize Jerusalem as Israel's capital.

The decision broke with decades of international consensus that the status of Jerusalem would be decided in a peace deal between Israel and the Palestinians.