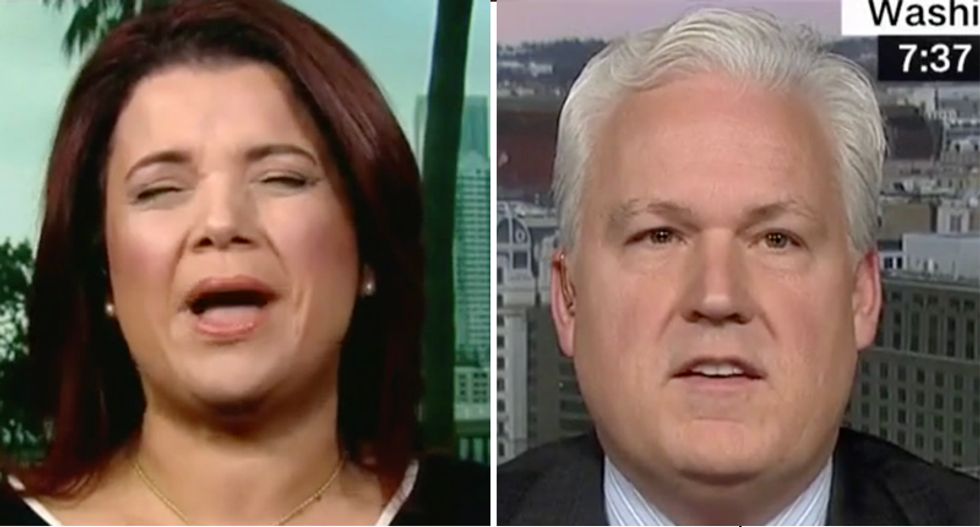 Both CNN host John Harwood and CNN regular Ana Navarro hammered an avid Donald Trump defender who made baseless claims that a FISA warrant at the heart of a memo critical of the FBI compiled by Rep. Devin Nunes (R-CA) was ordered by former President Barack Obama.

"Look, John," Schlapp told the CNN host."It is a very fair question. these are troubling times. I am disgusted and dismayed that during a presidential election President Obama used the intelligence community to essentially spy on its political opponents."

"Hang on, hang on," Harwood interrupted. " You said President Obama used it. Where is your proof?"

Harwood once again interrupted the conservative to explain the process by which FISA warrants are obtained, with Schlapp responding, "I agree with everything you said despite one fact: what they did to get this FISA warrant."

"Who is they?" the CNN host pressed.

Following Harwood and Schlapp talking over each other over whether Nunes has read the documents behind the memo, co-panelist Ana Navarro joined the fray, accusing Schlapp of doing Trump's bidding and trying to destroy the special counsel Robert Mueller's investigation.

"I just think there is so much noise with the clear intent of muddying the waters of discrediting the FBI, of discrediting Bob Mueller, of trying to lay the groundwork so he can fire [Assistant AG Rod] Rosenstein, and then, you know, go after Mueller," Navarro said, but not before telling Schlapp "You've already talked a hell of a lot," as he tried to interrupt her.

"This is to me a very clear road map here with the help of a lot of people, with the coordination of folks in Congress, in the right wing media, in coordination with surrogates and allies, of just drumming up all of this nonsense, conspiracy theories under the direction of the White House" she continued.