WATCH: Jill Stein comes unglued when asked about her visit to Russia in bonkers MSNBC interview 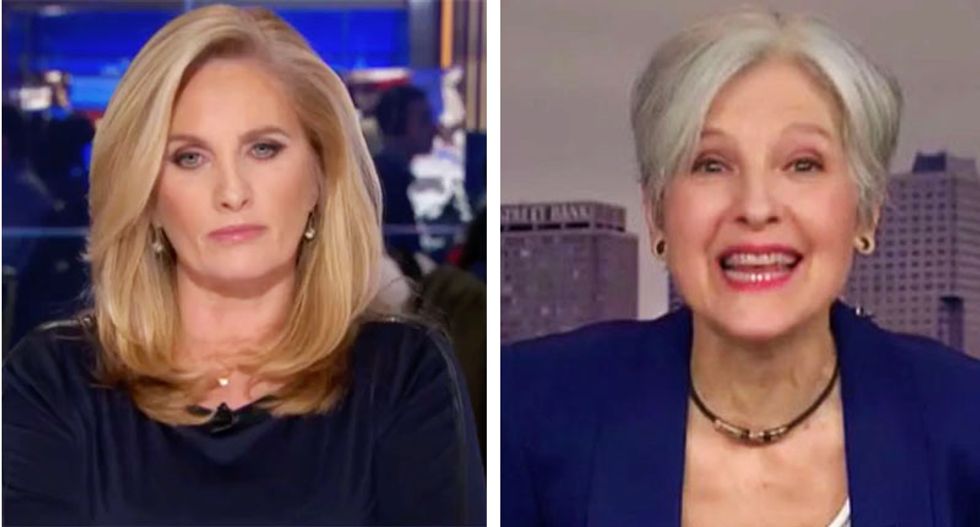 Speaking with MSNBC's Alex Witt, the two-time nominee at times shouted over the host, after deflecting questions about Russian involvement in her campaign, saying she knew of only one post on her Facebook page out of "trillions" posted on the social media site.

As Witt attempted to ask the candidate if she was aware of Russian's helping her campaign, Stein talked over the host, complaining that they should be discussing the "$6 billion dollars" in free advertising the networks gave to then-candidate Donald Trump.

"No, we were not aware," Stein exclaimed. "Let me say we were aware of other kinds of interference.  For example, we know that $6 billion in free air time was given to Donald Trump by the big networks. Six billion, this was twice as much as Hillary Clinton's campaign and four times as much as Bernie Sanders' campaign and way more than the independent candidates."

"But it is not Russian interference, and I am proud to say that we had you on our broadcast several times and I had you on in person," Witt reminded the former candidate.

"Donald Trump, he was damn good, that was the word -- he was damn good for the networks even though he was not good for America.," Stein pressed on, ignoring Witt. "The point I am making here, Alex, is we don't want to miss the forest here through the trees. Yes, there was Russia interference but there was compelling interference going on by way of media and the DNC. Did the DNC did not rig the primaries?"

Things went further downhill after Stein was asked about her meeting with Russian Vladimir Putin in Moscow, which Stein called a "smear."

"Well, in fact, my presence there was not covered here in the United States whatsoever," Stein protested. "It was not until it became a scam basically, a smear campaign against me and it speaks volumes of when did that happen? We were public and there were no backroom meetings and this was all being announced on our press releases and our website and e-mails. There was no secrets."

"They saw you had an active campaign," Witt attempted to explain. "'Doctor Jill Stein, this is another presidential candidate.'"

"Well, they did not assist me in any way," Stein shot back. "There was an effort being made to try to degrade my campaign, that was what was going on here. You had two political parties that are scared of their opposition because they saw a revolt."

Watch the whole interview below via MSNBC: