WATCH: Trump has been on ‘The View’ 18 times — and here are his five weirdest moments 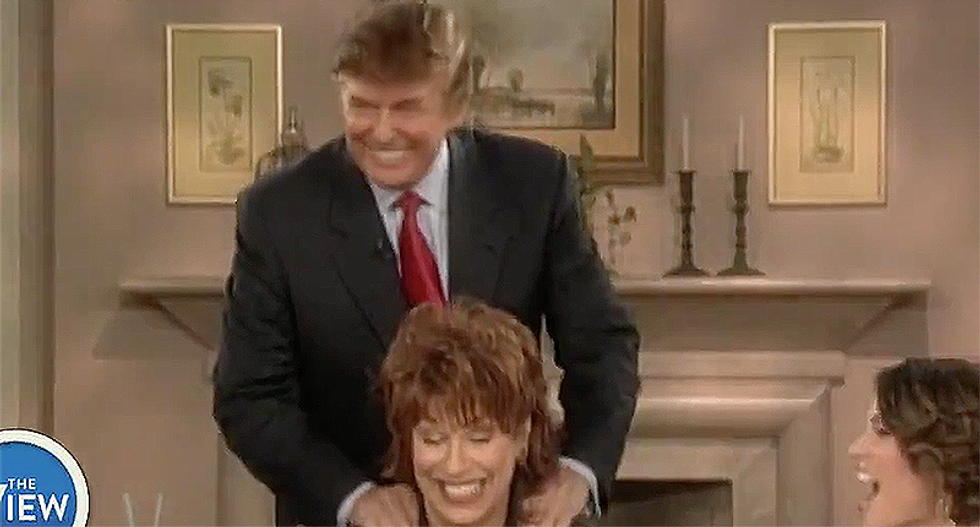 Trump appears on The View in 2003 (Photo: Screen capture)

Remember that time President Donald Trump said he would be dating his daughter Ivanka if she wasn't his daughter? That happened on the set of "The View," and at the time the hosts were trying to be polite and hide their horror.

Celebrating President's Day, "The View" recalled the top five appearances Trump had among the 18 times he spoke with the co-hosts over the years.

One was the time Trump came on to explore the persistent "hair" question. While Americans have uncovered what's under the presidential coif, back in 2003, Joy Behar gave it a tug herself.

"I believe him, because I believe Donald," Behar said in 2003. "He's an upstanding American. But people don't believe him."

Trump's most publicized moments was when he sat on the couch with the women to proclaim his daughter was so hot he'd date her.

"You know, you are sick," echoed former co-host Meredith Vieira.

"Who are you, Woody Allen?" Behar asked.

In a 2015 interview after Trump declared and claimed Mexicans were rapists, an angry Whoopi replied to the voice of Trump on the phone that not all Mexicans are rapists and murderers.

Just three years before that, Trump denounced those who simply "take it" when they're attacked "terrible." Behar argued at the time that ad hominim attacks aren't worth responding to, such as things like "you're fat" and "you're stupid."

"Why do they have no effect? Donald's been doing them?" former host Barbara Walters asked.

The top former appearance, however, came from a 2011 episode in which the women hammered Trump on being a birther. Walters and Goldberg both lost their cool.

"Whoopi, I love you!" Trump told her at the time.

"I love you to and I think that's the biggest pile of dog dog mess I've heard in ages!" she replied.

TRUMP'S TOP FIVE 'VIEW' MOMENTS: He appeared over 18 times on @theview before becoming our commander in chief — the co-hosts look back at Pres. Trump's many conversations with us over the years. #PresidentsDay pic.twitter.com/mDRxsrucTv