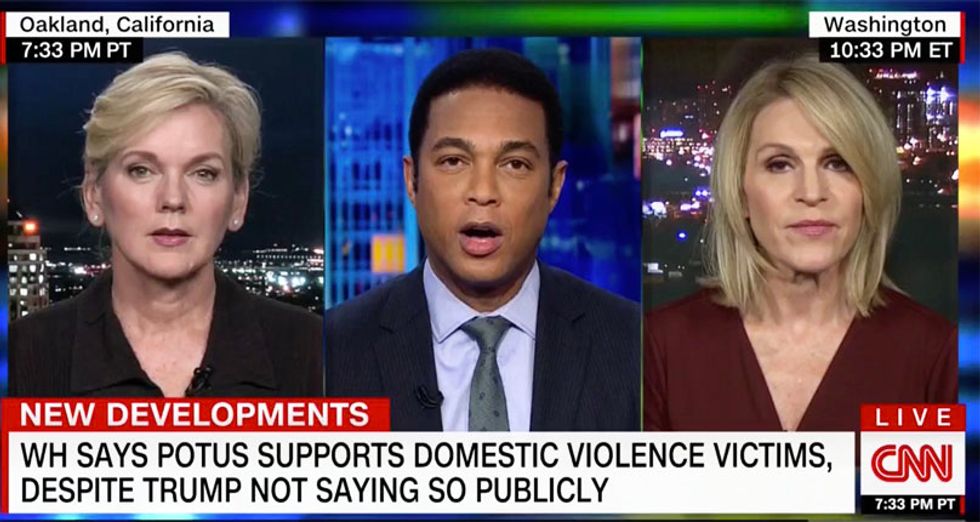 During a panel discussion on White House Press Secretary Sarah Huckabee Sanders' painful press briefing on Tuesday -- where she had no answers for what appears to be a White House cover-up of the Rob Porter scandal -- all three participants had harsh words for the daughter of President Trump who has held herself up as a champion of women.

"When I had a press secretary when I was governor, her credibility was on the line," Granholm explained. "And if there was something she didn't know and it was potentially embarrassing, or she needed to find out the facts, she was darned well going to track down those facts because she is the one standing up in front of the press."

"I cannot believe that Sarah Huckabee Sanders has let a whole week go and truly doesn't know or hasn't insisted on getting her act together, and that she's weaving all of this stuff," she continued. "It's just particularly painful to see as a woman."

"Alice, where has Ivanka been in all of this?" Lemon asked. "She was an outspoken critic of Roy Moore and reportedly  she was upset last week when she saw the picture of [Rob Porter wife] Colbie Holderness. Why do you think we haven't heard more from her? She is an adviser and today she tweeted about infrastructure?"

"I don't know," the distressed conservative replied. "That's troubling to me. It didn't take her anytime, thankfully, when the Roy Moore situation came about for her to tweet that there's a special place in hell for those who prey on children and sexually harass children."

"I was expecting a similar tweet here," she continued. "There's also a special place in hell for people who beat their wives -- and that's the reality. And the silence throughout the administration is deafening. I do commend Kellyanne Conway. Over the weekend, after she gave the party line, she did, herself, personally say that she believes these women and she hopes that those who are suffering silently do take this opportunity to come forward and empower them."

"This is why only 29 percent of women now support Donald Trump, an historic low," Granholm contributed. "And it's why, honestly, the 36th seat flipped from red to blue today. This was the one in Florida --  another woman wins. These women across the country are feeling like they are not being heard, but they're finally feeling like, wow, this is our moment to take our nation back. and bravo for them."