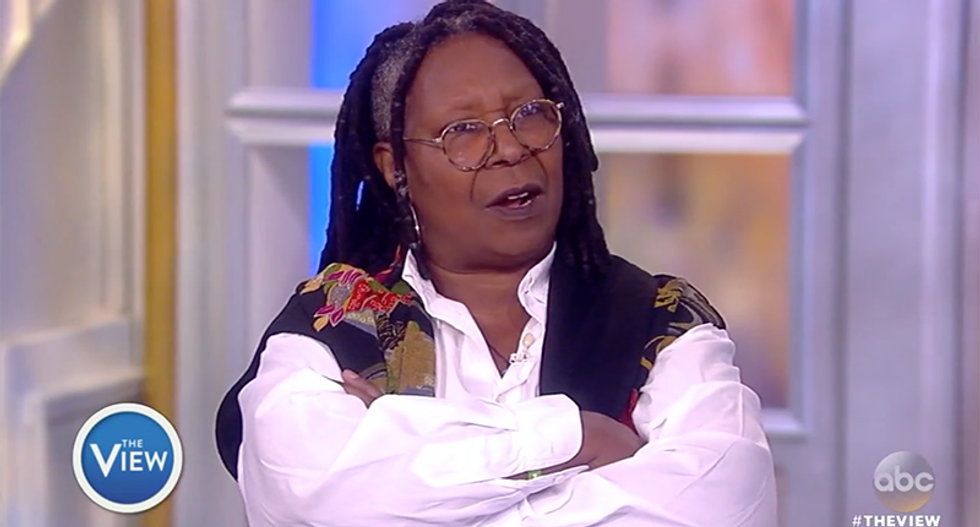 Whoopi Goldberg couldn't help but notice that leaders of the Republican party like Speaker Paul Ryan (R-WI) and Senate Leader Mitch McConnell (R-KY) have been remarkably silent in wake of the Stoneman Douglas massacre.

"One of the things I heard over the weekend and people kept saying is 'Well, where were the Republicans?'" Goldberg asked. She wondered if it was because they didn't have anything to say.

"Well, they're between a rock and a hard place," co-host Joy Behar noted. "I'm sure they don't want anything like this to happen. Even [President Donald] Trump doesn't want it to happen. On the other hand, they have a lot of money coming in from the NRA for their reelection."

Meghan McCain disputed the claim Republican leaders weren't saying anything because Sen. Marco Rubio (R-FL) showed up to the town hall and got eviscerated. McCain also said she and her friends have been talking about it all through the weekend. But Goldberg cut in and asked where the party's leaders are. Why was Rubio the only Republican that showed up to the town hall?

"They're not having a conversation," Goldberg said.

"I had a conversation about this all weekend," McCain maintained.

"Right, but it has not been public is what I'm saying," Goldberg said. "You know, when the athletes were kneeling every Republican sort of had something to say. And it's not a criticism, I'm just wondering where they've been. Where they stand on this particular issue."

"I think when it comes to guns and gun control, people put their party before country," said Sunny Hostin. "And I believe they put their quest to remain in power over the needs for community. You have these children that are in pain and struggling with that grief ... and struggling to deal with things that no child should have to deal with. They are looking to the grown-ups for guidance and assistance and Republicans are the controlling party now. And I wish I heard more from Paul Ryan and Mitch McConnell."