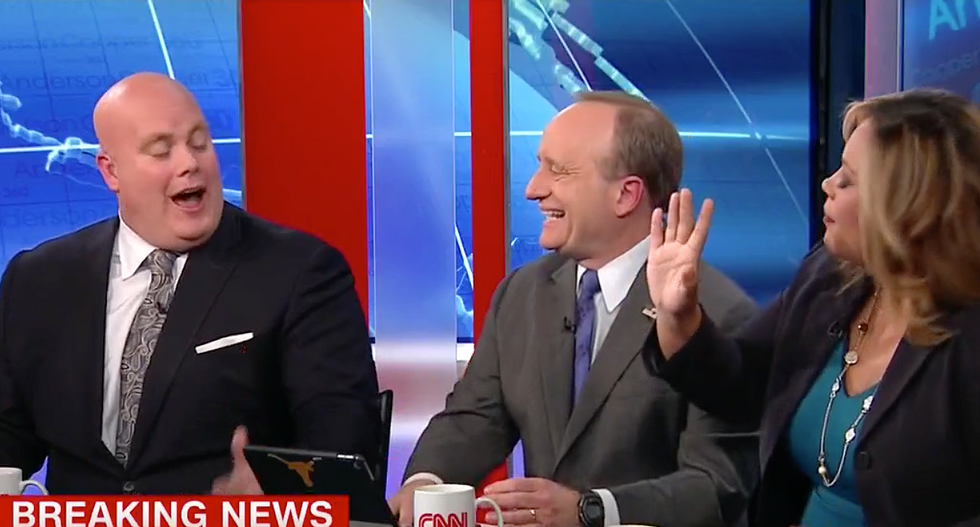 Host Anderson Cooper asked Kirsten Powers if she believes the Trump Organization lawyer's claim she was working in her “individual capacity" when she was listed in an arbitration demand involving longtime Trump attorney Michael Cohen. That question prompted the CNN political analyst to admit, “I feel like they're trying to slowly drive us insane.”

Jim Schultz, former special assistant to Trump, tried to argue that while “the optics are poor” and “it wasn’t a good decision," the outrage over a Trump Organization lawyer's involvement in the Daniels saga is overblown.

“[The lawyer was] not substantively working on [the Stormy Daniels] matter,” Schultz said.

“This is all just baffling to me,” longtime Bill Clinton advisor Paul Begala replied. “…Here’s the problem. Why oh, why is is Donald Trump—a man who's flamboyant about his sex life, who famously planted a story in the New York post front page about Marla Maples—why is he jumping through all these hoops?”

“This does seem like a guy who's susceptible to blackmail, who would do a lot to keep something he doesn't want to come out to come out,” Begala said. “That’s why it leads me back to Russia.”

“The guy is clearly subject to blackmail!” Begala explained.

“Yes, of course I believe he could,” Trump Hispanic Advisory Council leader Steve Cortes insisted. “You know who decided he got a security clearance? The American people.”

“Is any of this relevant?” Cortes asked. “Is anyone surprised that he wasn't Mother Teresa? Are we surprised he had a colorful past? No. Are we surprised there are accusers accusing him of nefarious things? No. The voters decided those accusations were irrelevant or not true.”

“This is where I can't take it, okay?” former GOP communications director Tara Setmayer shot back. “Because people like you and you, and every other Trump enabler that [enables] this kind of behavior would have been calling for the impeachment of Barack Obama or of Hillary Clinton or Bill Clinton like all of us Republicans in 1998 who went after Bill Clinton for his sexual affair with Monica Lewinsky—as we should have. I can't stand the hypocrisy. Stop making excuses!”

“You'll take all that, so the ends justify the means?” Setmayer asked. “You know how dangerous that has been in history? And the fact that we have Republicans sitting there using that excuse, ‘None of this matters.’ That was not the position we had many years ago.”

“We’re talking about the President of the United States that is engaged in behavior that's immoral, illegal and could make him susceptible to being immoral in other areas, including with Russia!” Setmayer said.

Watch the fiery exchange below: