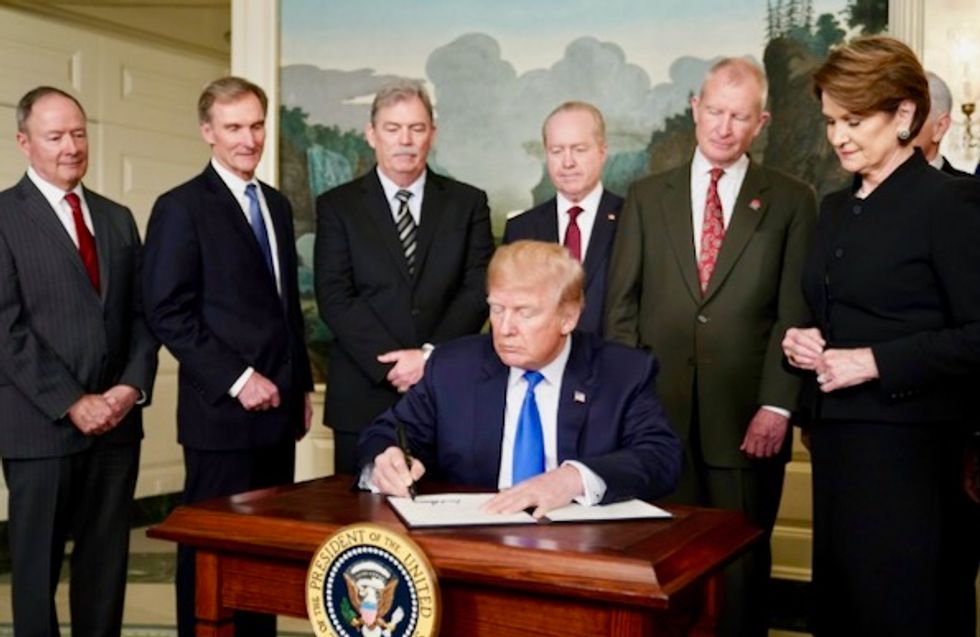 Beijing forcefully denounced President Donald Trump's decision Thursday to impose tariffs on billions of dollars in Chinese goods, accusing him of putting the two economies on course for a trade war.

"If a trade war were initiated by the US, China would fight to the end to defend its own legitimate interests with all necessary measures," China's embassy in Washington said in a statement.

"We urge the US to cease and desist," the embassy said, warning that by endangering China-US trade relations Washington will "eventually end up hurting itself."

In the latest in a series of aggressive moves on trade, mostly targeting China, Trump authorized new sanctions on up to $60 billion of Chinese imports to retaliate against "theft" of American intellectual property.

The tariffs and the goods targeted will be identified in the coming weeks, but Trump said they could be as high as 25 percent - what he called a "reciprocal tax."

The embassy's statement was issued moments after markets closed on Wall Street but investors had already taken Trump's move as a bad omen, with the benchmark Dow Jones Industrial Average falling more than 700 points amid fears of a tit-for-tat trade confrontation.

Washington accuses Beijing of forcing US companies to enter joint ventures and transfer technology and trade secrets to their Chinese partners. At the same time US companies are not able to license intellectual property in China.

The embassy said China had shown "sincerity in making reasonable suggestions" and made "great efforts" to deal with the current trade imbalance with the United States.

The United States recorded a record $337.2 billion trade deficit with China last year, and Trump demanded it be reduced by $100 billion.

For the second time in a month, events in Washington whipped anxiety that Trump's "America First" confrontations with major trading partners were headed toward full-scale trade conflict.

But Commerce Secretary Wilbur Ross suggested the new measures on intellectual property were in fact a way of bringing Beijing to the table, calling them "the prelude to a set of negotiations."