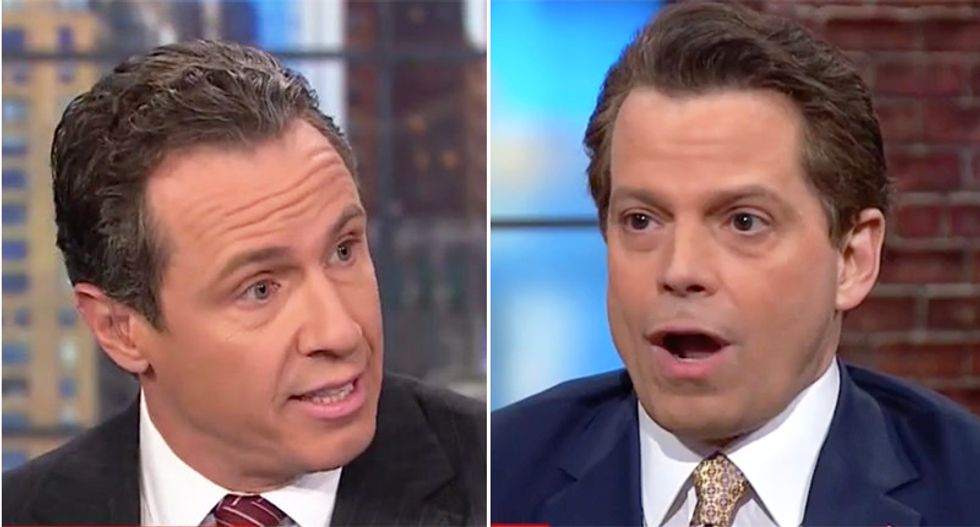 During an extensive interview with former White House Communications Director Anthony Scaramucci, CNN host Chris Cuomo slapped down his defense of Hope Hick's claim of only telling "white lies" by pointing out she had denied Russian contacts with White House insiders.

Scaramucci was invited on to talk about the continuing turmoil in the White House that has now claimed the Trump administration career of Scaramucci's successor Hicks, who announced she is quitting a day after she testified before the House Intelligence Committee for eight hours.

Asked about Hick's admission that she had told "white lies" in an effort to defend the president, Scaramucci took offense by saying everyone lies and that the real problem was that someone on the Intelligence Committee leaked her confession.

"Let's start with white lies," Scaramucci told the New Day host."Tell me a person that hasn't told a white lie. I will identify that person as the biggest of liar in the room. She's in a closed-door session, they're asking her stuff, it's under oath and so is the integrity of every sentence, every syllable."

"They asked if she told any white lies, and she said 'yes,'" he continued. "Then they pick up the phone and drop the dime on her. It's a closed session and it is unfair. It is in strict confidence, now they are trying to colorize this woman, who is an extremely gifted professional, as a liar. So I submit to everybody else, hold a mirror to your face and tell me you haven't told  a white lie."

"But qualifying your critique of that, is the idea that she said nobody on this team met with any Russians -- we know that's untrue," Cuomo shot back. "She should have known it was untrue when she said it. I don't count that as a white lie."

"I don't know the exact facts of that situation it and I don't know if she didn't know it. I can't address that," Scaramucci parried. "What I can address is her integrity."

"She said it to the New York Times, two days after the election -- she knew," Cuomo pressed.

After Scaramucci claimed he was a good judge of people, Cuomo went on the attack again.

"You think she was one of the good ones. But what about the Rob Porter situation?" Cuomo demanded, in reference to Hicks helping craft a White House statement on a senior colleague accused of beating his wives -- and who Hicks was reportedly dating.

"I hold the White House Chief of Staff accountable for that," Scaramucci retorted before launching into an attack on chief of staff John Kelly, adding, "He fires me in five seconds and these guys are smacking their wives around and he is trying to keep them in the White House."