David Hogg demands young voters vote out NRA shills in Washington: 'You can hear the people in power shaking 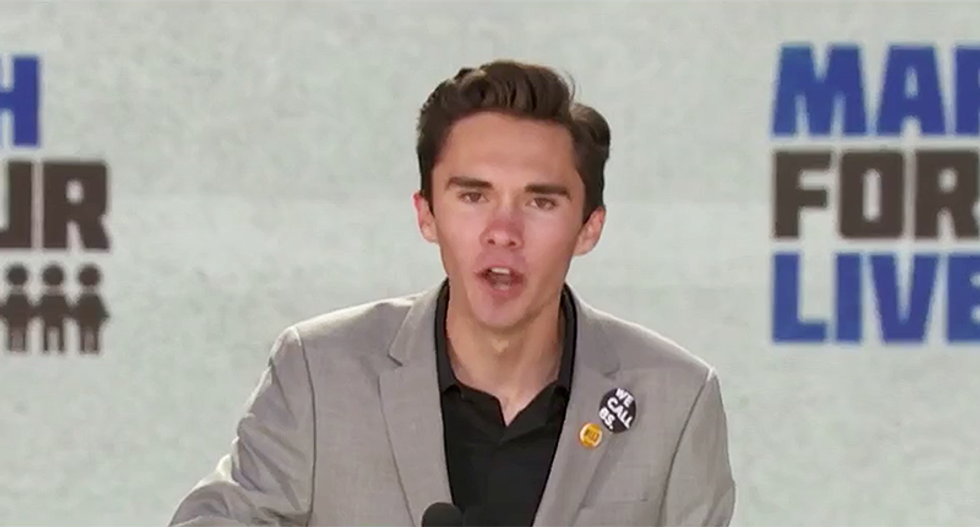 In a fiery speech to the Washington, D.C. March For Our Lives, Parkland, Florida, student-turned-activist David Hogg went off on politicians who choose the NRA over Americans.

He put a tag on the microphone that displayed $1.05. It represents how much Sen. Marco Rubio (R-FL) accepted from the NRA in political contributions, divided by those students killed on Feb. 14.

"The cold grasp of corruption shackles the District of Columbia," he said with the U.S. Capitol rising behind him. "The sun shines on a new day and the day is hours. For the first time, voters showed up 18 percent of the time in midterm elections. Not anymore."

He asked the crowd who was going to vote in the 2018 election and the crowd went wild with a call to a different kind of arms.

"If you listen real close, you can hear the people in power shaking," he said. "They have gotten used to being protective of their position, choosing the safety of inaction. Inaction is no long safe. To that we say, no more! Ninety-six people die every day from guns in our country yet most representatives have no public stance on guns. And to that we say no more! W are going to make this a voting issue. We are going to take this to every election, to every state, and every city. We're going to make sure the best people get in our elections to run, not as politicians but as Americans. Because, this is not cutting it."

He noted that there will be people who attempt to suppress their votes and claim they are "too young." He lead the crowd in saying "No more!"

"When politicians say that your voice doesn't matter because the NRA owns them, we say no more! When politicians send their thoughts and prayers with no action, we say no more!" he continued. "And to those politicians supported by the nra, that allow the continued slaughter of our children and our future, I say, 'get your resumes ready.' Today is the beginning of Spring. And tomorrow is the beginning of democracy. Now is the time to come together not as Democrats, not as Republicans, but as Americans. Americans of the same flesh and blood that care about one thing and one thing only and that's the future of this country and the children that are going to lead it."

He warned that their detractors would attempt to separate people into demographics like religion, race, Congressional districts and even class. But he warned that they would fail.

"We will come together," he continued. "We will get ready of these public servants that only serve the gun lobby. And we will save lives. You are those heroes. Let's put the USA over the NRA. This is the start of the spring and the blossoming of our democracy. Let's take this to our local legislators and let's take this to midterm elections because without the persistence of voters everywhere getting out to every election, democracy can't flourish. I say we will not stop until every man, every woman, every child, and every American can live without fear of gun violence."

Watch the speech below: