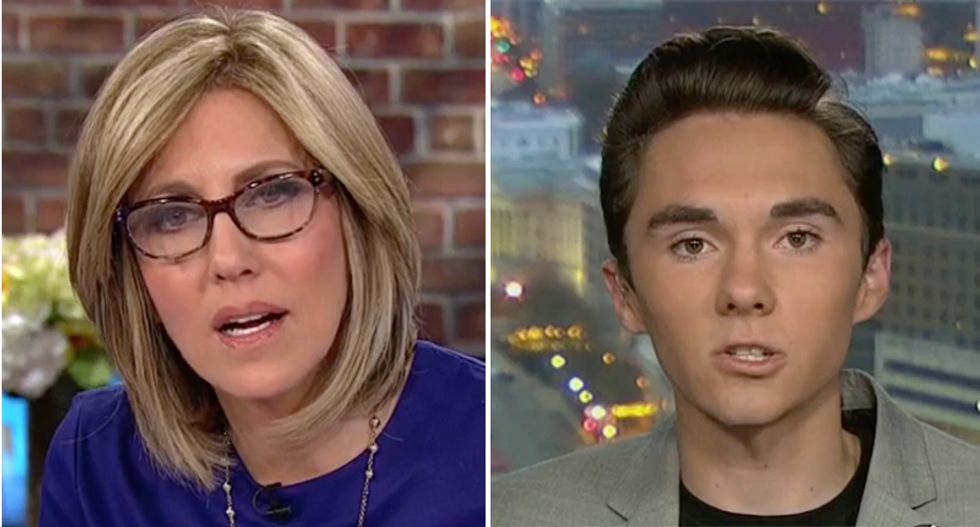 In an interview with Parkland teen David Hogg, CNN host Alisyn Camerota praised Parkland survivor David Hogg for facing down commentator Laura Ingraham by calling for a successful advertiser boycott of her Fox News show -- then  blurted, "What kind of dumbass colleges don't want you?"

Ingraham, the conservative talk show, set off a firestorm on Twitter this week for mocking Hogg's admission that he was not accepted at every college he applied for. The offensive attack on the teen who witnessed 17 deaths at Marjory Stoneman Douglas High School in Florida boomeranged on Fox News personality who saw --at last count count -- seven sponsors drop her show despite her apology.

Appearing on CNN, Hogg said he did not accept her apology.

"Listen, there's been seven advertisers that have pulled out of the show after one tweet from you," Camerota noted. "It seems like you have a lot of power at the moment and I'm just wondering how you feel about all of this?"

"I think it's great that corporate America is standing with me and the rest of my friends," Hogg replied. "When you come against any of us, me or anyone else, you're coming against all of us. It is important that we stand together as corporate and civic America and show them they cannot push us around, especially when all we're trying to do here is save lives."

"When people try to distract, like what Laura is trying to do from what the real is issue is, gun violence in America, it's not only is sad but wrong," he continued. "She is trying to distract from that, and I hate it."

"Listen, you know she's a talk show host," Camerota stated before reading Ingraham's apology. "She's not objective. Her point isn't even to be objective. She has a particular position and she's a conservative. But, listen, after the advertisers started pulling out, she did issue an apology. "Any student should be proud of a 4.2 GPA, including David Hogg. In the spirit of Holy Week, I apologize for any upset my tweet caused him or any of the brave victims of Parkland. I believe my show was the first to feature David immediately after that horrific shooting is and even noted how poised he was given the tragedy.'"

"Do you accept her apology?" the New Day host asked.

"No," Hogg bluntly stated. "She's only apologizing after a third of her advertisers pulled out. I think it's wrong and I think if she really wants to do something, she could cover inner-city violence and the real issues that we have in America. I know she is a talk show host, but as such she also has a responsibility to show both sides of the story."

"She gets this threatening tone about us that we don't have," the teen added. "We're people that just want everybody to come together as Americans and help us solve this issue because we do have to reach across the aisle to solve this. This is not a Democrat or Republican issue. This is an American issue. As such, we have to work together."

Camerota then turned to Hogg's choice of colleges.

"David, I am stunned that four colleges rejected you," she exclaimed. "What kind of dumbass colleges don't want you? You have taken the country by storm. How do you explain this,  did they reject you before the Parkland massacre?"

"They rejected me about -- let me think, about two weeks ago, most of them," he replied. "UCLA and USD,  we have a highly impacted university system in America. and I think there is a lot of really good candidates that don't get into college."

"It goes to show, regardless of whether you get into college, you can still change the world," he explained. "The hardest part is believing you can, but you eventually will."