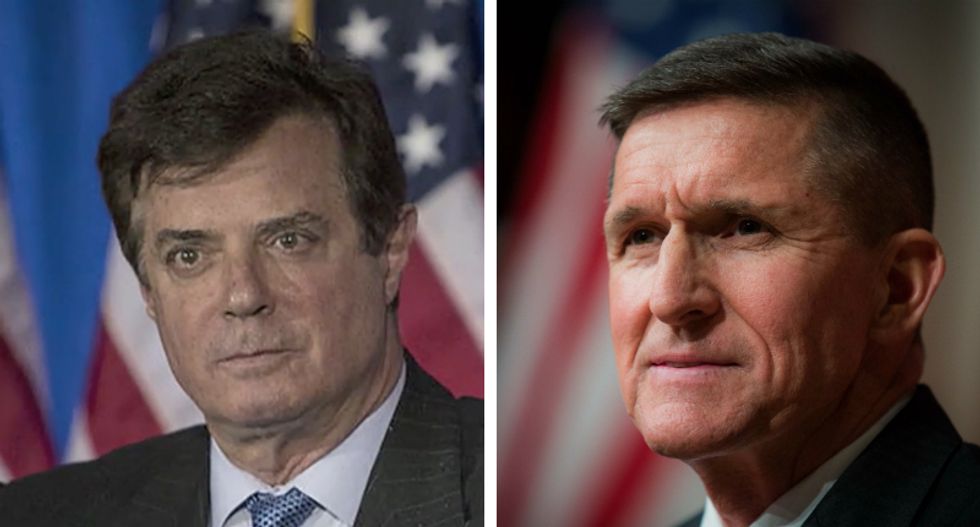 Steve Hall, who once served as the CIA's chief of Russia operations warned that one of the things the media isn't talking about enough is that former campaign manager Paul Manafort once offered to brief Russian oligarch Oleg Deripaska on President Donald Trump's campaign.

"When Paul Manafort was working for the then-President of Ukraine, Viktor Yanukovych, it's incomprehensible to me that Yanukovych, who was close to Putin and Moscow, and would have at least not been vetted, and perhaps had other contacts with Russia, Ukraine at the time though Yanukovych," Hall explained.

However, it was the outreach to Russia that had him puzzled.

"By far and away, for me, the most thing that screams out at me most is something we are not talking about right now, which is when Paul Manafort reaches out through an intermediary to a Russian oligarch by the name of Oleg Deripaska, very close to Putin, and says, 'Hey, if you need an inside, private briefing about how things are going in the campaign,' and this is when Manafort was, I believe the campaign manager. Manifort said, 'I'm happy to provide that.'"

Hall explained that it was akin to providing information directly to Putin himself on how the Trump campaign was going.

She said it's enough to make a mind wonder why they would even consider meeting with a former spy and the Russian ambassador.

"What were you talking about other than something that didn't have to do with the sitting administration?" she wondered.

Hall noted that reaching out like that would have both legal implications and counterintelligence implications that he anticipates special counsel Robert Mueller is investigating.

"First you have to understand how the Russians work," he explained. "In the United States, for example, somebody reaches out to the FBI with a foreign intelligence matter and the FBI usually says, 'Well, CIA handles that.' If it's foreign intelligence matter, vice versa. But that's not the way it works in Russia. Everybody works for Vladimir Putin. So, you know you can say, 'Well, the ambassador wasn't an intelligence officer' or you know, 'The guys that they were reaching out to, is somehow explainable. All that's true, but it gets, I mean, Sam is exactly right. It all gets funneled back to Moscow, to Putin, whose people are managing all of this."

He went on to say that there are spies that are trying to recruit people and probably penetrate the campaign. At the same time, an ambassador is penetrating other meetings.

"It's kind of interesting as to why he was there," Hall continued. "Especially when the plans of the future administration are apparently discussed vis-à-vis sanctions and sensitive issues. So, it's a real mess they hope Mueller is teasing out."

Vinograd noted that when it comes to people like Donald Trump Jr. or others that are inexperienced in government and policy matters, they won't know about communications with possible foreign operatives. But for people like retired Lt. Gen. Michael Flynn and then-Sen. Jeff Sessions (R-AL), they should have known better.

"I cannot, for the life of me, think that Jeff Sessions and Michael Flynn thought that they, all of the sudden, became popular with foreign operatives, right?" she said. "Like -- they knew better. Jeff Sessions was a senator Michael Flynn was the head of the DIA, and they didn't just win the popularity card somewhere around July 2016. They had to know that foreign operatives, foreign officials, like ambassadors, were going to reach out to them to try to get influence and manipulate them in case they came into power. So, you can make the excuse, maybe for lower level staff members. But the senior guys had years of training on them."

Hall agreed with the assessment that Flynn specifically "should have known better." However, "I've seen people his personality so many times from a counterintelligence analysis, where you've got somebody who's smart, who should know better, but who also thinks he's smarter than everybody else. That he can handle it. That he can swim with the tide. I think Flynn would have been a perfect recruitment target. I would have had a go at it if I were the Russians."

It was revealed Thursday that Sessions is now a target of inquiry by the Mueller investigation, specifically citing his meetings with Russian operatives and officials during and shortly after the Republican National Convention.