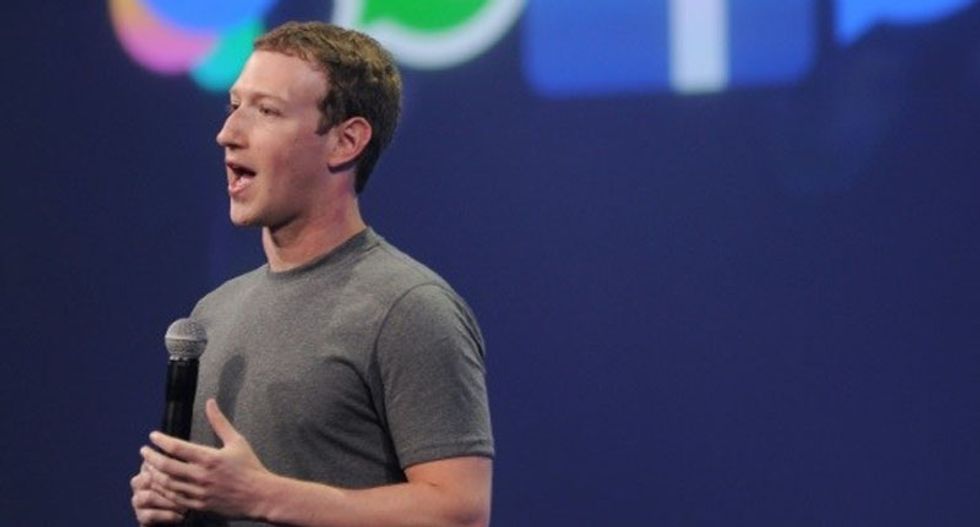 Facebook chief Mark Zuckerberg has vowed to "step up" to fix problems at the social media giant, as it fights a snowballing scandal over the hijacking of personal data from millions of its users.

"We have a responsibility to protect your data, and if we can't then we don't deserve to serve you," Zuckerberg said Wednesday in his first public comments on the harvesting of Facebook user data by a British firm linked to President Donald Trump's 2016 campaign.

Zuckerberg announced new steps to rein in the leakage of data to outside developers and third-party apps, while giving users more control over their information through a special toolbar.

"This was a major breach of trust and I'm really sorry that this happened," Zuckerberg said in a televised interview with CNN.

"Our responsibility now is to make sure this doesn't happen again."

Zuckerberg said he will testify before Congress if he is the person at Facebook best placed to answer their questions, and that he is not opposed to regulating internet titans such as the social network.

"I am actually not sure we shouldn't be regulated," the Facebook co-founder and chief told CNN.

"Technology is an increasingly important trend in the world; the question is more the right regulation than should it be regulated."

Zuckerberg said measures had been in place since 2014 to prevent the sort of abuse revealed over the weekend but the social network needed to "step up" to do more.

The app was downloaded by 270,000 people, but also scooped up their friends' data without consent -- as was possible under Facebook's rules at the time.

Facebook says it discovered last week that CA may not have deleted the data as it certified.

"We should not have trusted Cambridge Analytica's certification, and we are not going to make that mistake again," Zuckerberg said.

Facebook is reviewing how much data was accessed by every app at the social network, and will conduct full forensic audits if it notices anything suspicious, according to its chief executive.

"This was a breach of trust between Kogan, Cambridge Analytica and Facebook," Zuckerberg wrote in a post at the social network.

"But it was also a breach of trust between Facebook and the people who share their data with us and expect us to protect it."

Separately, in an interview with The New York Times, Zuckerberg said that even if the platform cuts developer access to Facebook data, as it plans to do, "there’s still this issue of: Are there other Cambridge Analyticas out there, or other Kogans who, when the platform worked a certain way in the past, were there apps which could have gotten access to more information, and potentially sold it without us knowing."

He also said that since the 2016 US election, Facebook has taken steps that make it harder for foreign governments to interfere in elections.

But, he added, "we need to make sure that we up our game" ahead of the US midterms in November because Russia and other states are going to get more sophisticated when it comes to meddling.

Zuckerberg's apology followed another day of damaging accusations against the world's biggest social network as calls mounted for investigations on both sides of the Atlantic.

Max Schrems, a Vienna-based activist who has brought online data protection cases before European courts, told AFP he complained to the Irish Data Protection Authority in 2011 about the controversial data harvesting methods.

Schrems also recounted a meeting with Facebook representatives the following year to discuss concerns around apps operating in this fashion.

"They explicitly said that in their view, by using the platform you consent to a situation where other people can install an app and gather your data," Schrems said.

ABC News reported that special counsel Robert Mueller, who is investigating Russian interference in the 2016 campaign, was looking at Cambridge Analytica's role in the Trump effort.

The British firm has maintained it did not use Facebook data in the Trump campaign, but its now-suspended CEO boasted in secret recordings that his company was deeply involved in the race.

The data scandal has ratcheted up the pressure on Facebook -- already under fire for allowing fake news to proliferate on its platform during the US presidential election.

A movement to quit the social network gathered momentum, while a handful of lawsuits emerged which could turn into class actions in a costly distraction for the company.

One of those calling it quits was a high-profile co-founder of the WhatsApp messaging service acquired by Facebook in 2014.

"It is time. #deletefacebook," Brian Acton said in a tweet protesting the social media giant's handling of the crisis.

Both Facebook and CA have denied wrongdoing, as attention focused increasingly on Kogan, the inventor of the controversial app -- a personality survey dubbed This Is Your Digital Life.

But Kogan said in an interview he was "stunned" by the allegations against him, claiming CA had assured him his activities were above board.

"I'm being basically used as a scapegoat by both Facebook and Cambridge Analytica," he told the BBC.

The University of Cambridge psychologist said CA had approached him to do the work, and that he did not know how the firm would use the data collected with his app.