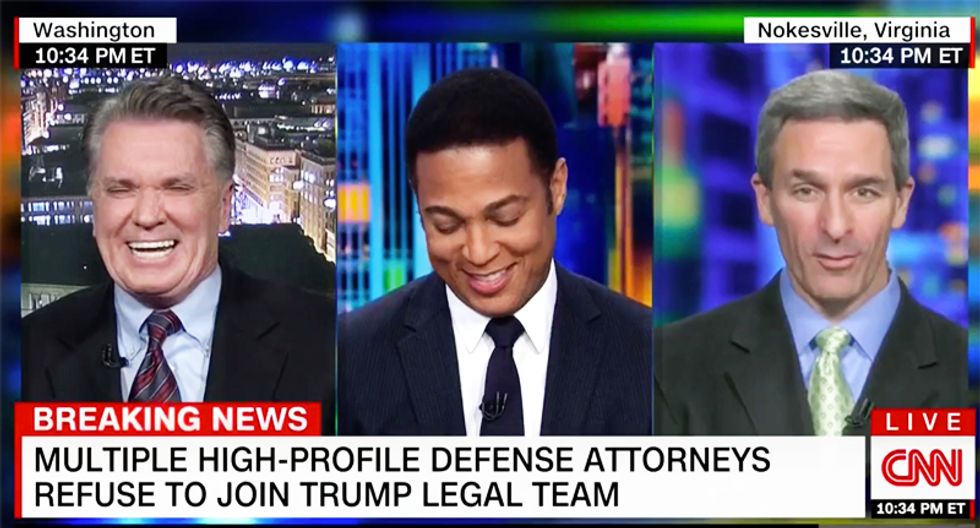 Appearing on CNN late Thursday night to discuss President Donald Trump's legal travails, former Virginia Attorney General Ken Cuccinelli (R) was put on the spot by host Don Lemon when he was asked if he would take a job as Trump's lawyer.

Discussing Trump attorney John Dowd quitting on the president because his client reportedly was refusing to listen to his legal advice, Cuccinelli explained that Dowd was trying to do his job.

"Well, it's hard and it isn't hard," the Virginia conservative explained. "I mean, a lot of lawyers would be very happy to put up with a lot of malarkey, to quote the former vice president, to be the president's lawyer. And that's a hell of an item to have on your resume and everyone will know it. Of course, it's also good to be able to exercise a strategy you believe is in the client's best interest and president trump wants to keep control of these things most like he does everything else in his administration at one point or another."

"And, as odd as it may sound, while clients decide and while lawyers merely advise, when you hire good lawyers you hire them to take their advice," he added.

"So, what are you saying? Who would want Donald Trump as a client, is that what you're saying?" Lemon asked as former Clinton White House Counsel Jack Quinn looked on while smirking.

"I'm saying it's a high risk -- they're way up the risk reward curve in terms of this. It's also going to be a big pain," Cuccinelli explained.

"Hey, Ken, would you take the job if offered?" Lemon asked with a smile.

"Would I take the job? Well, I wouldn't be asked," Cuccinelli demurred.

"That's not the question," Lemon pressed. "Would you take the job?"

Cuccinelli then tried to duck the question again by praising Trump attorney Ty Cobb, but Lemon refused to let him off the hook as Quinn burst out laughing.

"No, they'd be crazy to ask me" the attorney exclaimed, before adding, "I'm not the person to be in that role. I want him to have a good lawyer."