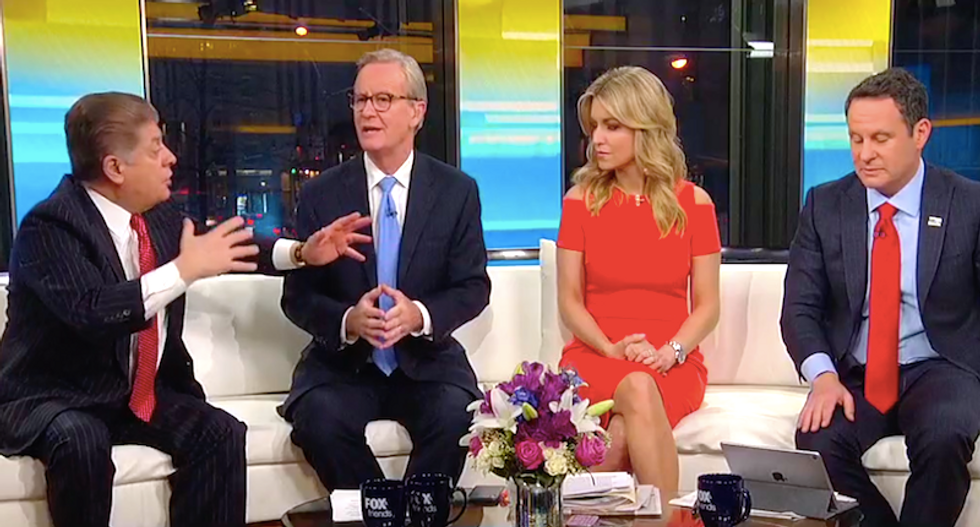 The Trump administration announced its plans to ask census respondents whether they are U.S. citizens, but California's attorney general intends to challenge the proposal as unconstitutional.

The hosts of "Fox & Friends" presented the issue as a simple "yes-or-know" question that had Democrats "up in arms," but Fox News legal analyst Andrew Napolitano explained in equally simple terms why the proposal was unconstitutional.

"Guess what? You have a right to remain silent," Napolitano said. "The census taker comes to your door, say 'Bye-bye, I'm here, I'm alive, one person, five people in the house -- leave us alone.'"

"If you answer, you have to answer truthfully," Doocy said hopefully.

Napolitano agreed, and tried to let Doocy down gently.

Co-host Ainsley Earhardt was unable to wrap her mind around the premise.

Napolitano said he understood why the government wanted to count non-citizens, and he characterized California's planned challenge as something of a declaration of war.

Co-host Brian Kilmeade took another bite at the apple by reading from the U.S. Constitution that establishes the census, but Napolitano said it was fairly vague on which questions were required.

"Count -- not asking how many toilets you have or what your ethnic background is -- count, how many people are in the house," Napolitano said.

Kilmeade finally got the point Napolitano had been trying to explain.

"So the Constitution might be on California's side?" Kilmeade said, with clear surprise.

"Yes," Napolitano told the panel, who sat a moment in stunned silence. "I don't know where it's going to go, they haven't filed the complaint yet. If the issue is, do you have to answer the question? Ainsley said it. If you answer you have to answer truthfully, otherwise you remain silent and answer nothing except number of human beings in the house."

"It seems like a fair question," he said. "If you're going to base electoral votes, federal spending, congressional districts on heads, you should know how many heads there are. It shouldn't be an estimate."

Napolitano explained that's why the census was established, but he said centuries of constitutional law had never resolved the tension between individual rights and government authority.

"There is this clash between the individual right to silence and government's right to know how many people live there," Napolitano said.

Kilmeade grew giddy at the headiness of the morning's exchange.

"Don't you love the constitutional debate I had with the judge?" he said.