Fox host calls on Bernie Sanders to give up wealth or leave US: 'This country was founded on capitalism' 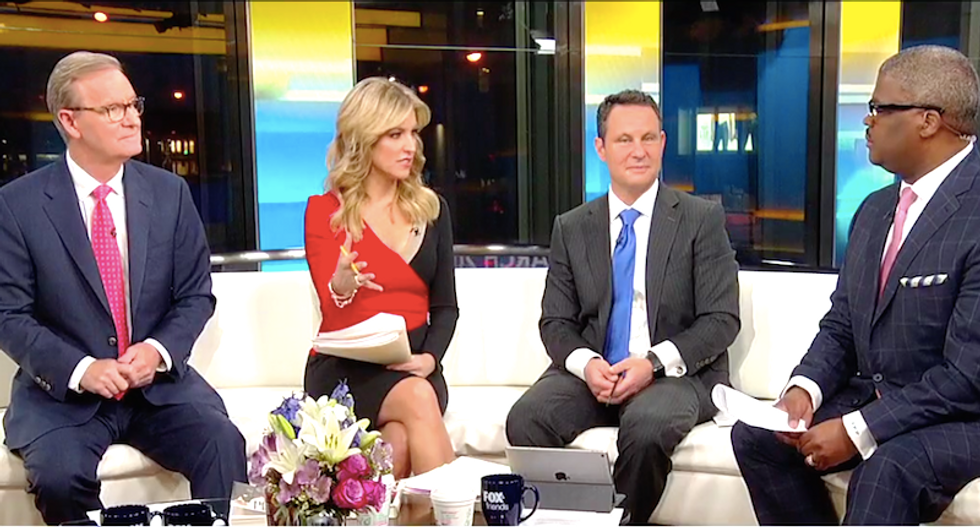 A Fox News panel agreed wealthy Americans shouldn't care about income inequality -- and if they do, they should either leave the country or give away all their money.

Charles Payne, a Fox Business commentator, appeared Tuesday morning on "Fox & Friends" to rake Sens. Bernie Sanders (I-VT) and Elizabeth Warren (D-MA) over the coals for their town hall the night before on income inequality, where they were joined by filmmaker Michael Moore.

"The hypocrisy goes on and on," Payne said, as he complained about the town hall hosts being wealthy.

Payne claimed cities and states governed over the long term by progressives experienced the most extreme levels of wealth inequality, and he blamed the gap on business regulations.

"It's really amazing -- it's the homelessness, the hopelessness, it's really absolutely amazing," Payne marveled. "They keep pushing this narrative that somehow they are going to save the world and America particularly from income inequality."

Co-host Ainsley Earhardt hinted at a global conspiracy, which she based on a sliding scale for traffic fines in Finland.

"They have this global vision -- what was it Finland yesterday we said you get a parking ticket based on your income?" Earhard said. "They need to go to another country, this country was founded on capitalism. That's what makes America wonderful."

Payne drew the opposite conclusion from many readers of a New York Times article that showed black boys raised wealthy still earned less than their white counterparts.

"They inadvertently also proved that we have an amazing ability to create wealth," Payne said. "They had a graph that showed the bottom income and how they move up into the system -- that's really amazing. It wasn't their intent, it actually proved that there is an amazing ladder for anyone in America to climb it."

Payne blamed liberal governance, not capitalism itself, for rapidly increasing housing costs in parts of California.

"Look in this country and look at the places where people are really -- I mean, Los Angeles, people live in campers and tents," he said. "San Francisco, the average working man in San Francisco cannot afford to feed their family. They have been in control there forever."

Earhardt suggested wealthy liberals should give away their money instead of pursuing public policies to improve the living conditions of some Americans.

"Instead of preaching that, why don't they take their combined millions and divide it up and live on the average American salary and give it to the people that they think are poor and not equal?" she said.