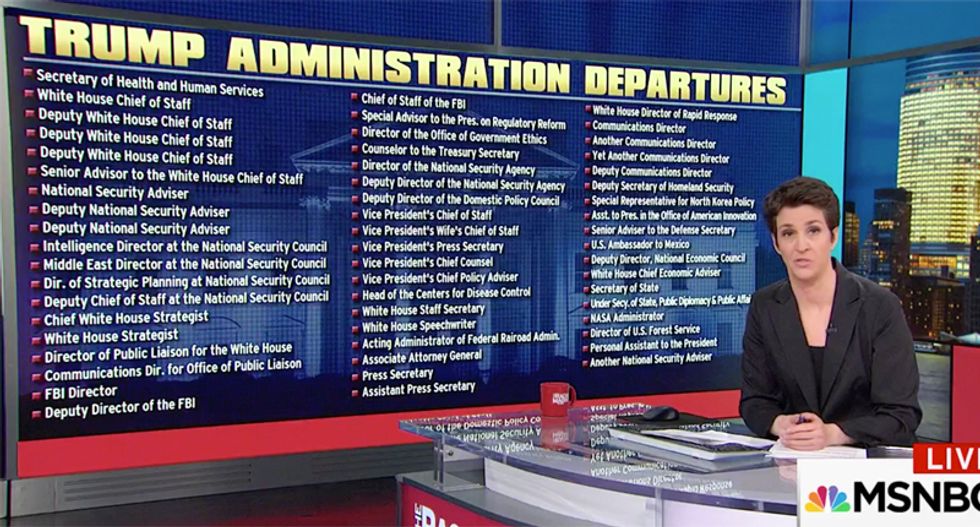 MSNBC host Rachel Maddow smirked her way through the announcement that President Donald Trump has cut yet another cabinet member loose from his administration by turning to her big board of departures and wondering where she could fit H.R. McMaster's name.

For weeks the puckish MSNBC host has been keeping a running list of high and mid-level Trump firings and resignations on a big blue board behind her -- and Thursday she was able to chalk another one up.

"Nothing in the news, a quiet night," Maddow began with a knowing smile. "The president fired his lead lawyer for the Russia scandal -- maybe for a very specific reason. The secretary of state said good-bye and left his job and the president hired yet another Fox News personality to join the Russia legal team and hired another Fox News personality to become the new national security advisor, which means he's firing the existing national security advisor right now."

"Just in the past three weeks, this president and this White House have chewed up and spat out the communications director who is reportedly the president's single most trusted aide,  Hope Hicks," she continued. "Also the president's personal assistant, also his staff secretary, also his chief economic advisor, also the deputy White House chief of staff, the deputy director of the FBI and the aforementioned secretary of state replaced by the person serving as director of the CIA which means there needs to be a new director of the CIA tonight as well and the national security advisor is out too."

Taking a breath, and turning to her updated  blue board, Madddow quipped: "We're going to need another wall soon."