GOP lawmaker goes down in flames defending Hope Hicks’ ‘white lies’: ‘That shows how honest she was being’ 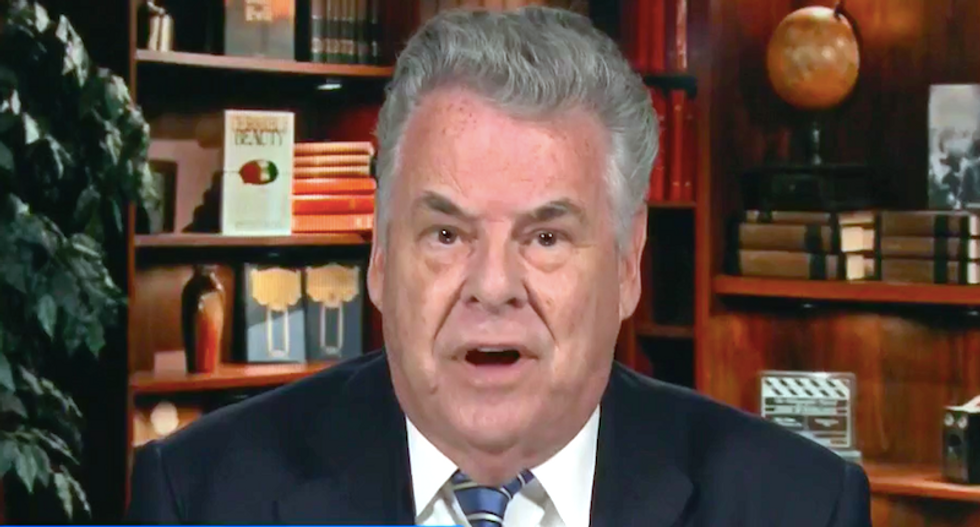 A New York Republican insisted on MSNBC that Hope Hicks' admission that she sometimes told "white lies" for President Donald Trump enhanced her credibility and showed she has manners.

Rep. Peter King (R-NY) was present Tuesday when the House Intelligence Committee questioned Hicks, and he said the White House communications director gave no indication she would resign the following day.

"I think she did an excellent job of testifying," King said. "She was being vilified, she was being attacked. She never lost her composure, she was articulate, she answered every question about the campaign."

"The fact that at the end of the day, to me, it shows how weak the Democratic case was, after nine hours of testimony, attempting to find Russian collusion, all they could get was Hope Hicks being as honest as anyone could be, as anyone should be, when they asked her have you ever told a lie, she said only a white lie," King continued. "For instance, saying Donald Trump was not in when people maybe wanted to meet with him, but she made a point of saying that her testimony was entirely truthful."

MSNBC's Kristen Welker, filling in for Andrea Mitchell, pressed King on that point, saying Hicks was the first Trump official to admit to making false statements.

"It was a stupid question," King insisted. "If I asked you, if you asked me, if you asked anybody in the world have you ever told a white lie, of course you have -- it's a matter of courtesy. You are going to tell someone he doesn't want to meet with you because you're a jerk, you say no, he's busy right now. That's what she was talking about."

King again clarified that Hicks was talking about the period before Trump's inauguration, but he told Welker that White House officials had probably lied to him before.

"That part of the testimony did not involve when he was president," King said. "To be honest with you, if somebody calls the White House, I have called the White House a number of times -- not President Trump, by the way, certainly other presidents. They say, 'No, he's busy right now.' For all I know, he's not -- he doesn't want to talk to me. I don't take that as a personal offense. When she says she never told untruth in anything involving policy, involving the investigation, involving Russia, to me there's nobody in the world, anyone who doesn't tell a white lie at some time, who denies that is not being truthful. That shows how honest she was being."