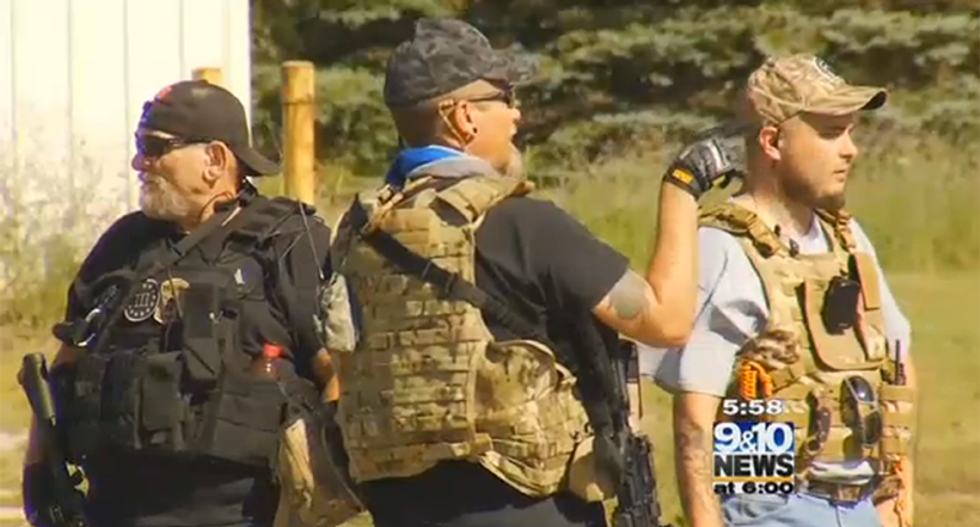 On Saturday, March 3, some of the same nationalist militia groups that took part in last year's Unite the Right rally-turned-riot in Charlottesville, Virginia, will converge on nearby Verona, a small town where the nationwide offices of a pro-immigrant and anti-white-supremacist law firm is located. AlterNet's Steven Rosenfeld spoke to Mike Donovan, the CEO of Nexus Caridades, about the nationalist militias targeting his civil rights firm, and his plans for a counter-protest.

Steven Rosenfeld: Your company provides services to immigrants, including those without visas. You’ve heard from state and local police that the same groups responsible for the Unite the Right riot in Charlottesville were planning to hold protests at your offices on Saturday. Tell me what you heard.

When we had the meeting, I couldn't attend because I was not in Virginia at the time. And they informed us that there was a protest planned on Saturday. They anticipated that as many as 500 people might appear at that rally, according to the state police—from what they heard or what they investigated. And they told us that the county had made certain decisions. They were going to close the road, which is the only road into and out of our complex. There’s just not enough room for 500 people to be held in a grassy area. We get the sense there will be protesters across the street and funneling onto the street. I also think they were trying to limit vehicular traffic after Charlottesville. The police did seem very concerned—and I have to give them credit, I think they have done a great job so far in trying to prepare as best they can. They let us know pretty quickly. So we were able to find out about some of the individuals who are organizing this rally.

SR: Who will appear? Who is organizing this?

MD: There’s a gentleman named Larry Lewis, who’s one of the Virginia leaders of the Three Percenters. I was little surprised. I looked up the Three Percenters. I don’t want to call them a gun rights group, because I think that’s not fair. They’re more of a weapons of mass destruction group. They believe that people should be able to own assault weapons and weapons of war. They tend to protest with those weapons. Calling them a gun rights group doesn’t do enough.

They’re obviously a fringe group. They’re an anti-government group, according to the Southern Poverty Law Center. I hadn’t seen a lot of anti-immigration stuff that they’ve done. I’ve seen some. Certainly, they post on their social media about immigration. But when I started to look a little bit deeper into the organizer, he has a very clear white supremacist, anti-immigrant ideology. I think he believes, just perusing his social media, that immigrants present a clear and present danger to his perceived community and perceived world. The guy clearly is a bit demented. And it seems that the folks that have rallied around him share these views.

Now it is important to understand that even demented people have the right to protest. I respect the First Amendment. I think that if they want to come and protest, they absolutely have the right to do that. But, I believe that there’s no place for weapons of war in protests and peaceful demonstrations. They shouldn’t bring those weapons to our campus. They should keep them away. And in the marketplace of ideas, the better ideas win. And there’s no reason to have guns at protests, in my opinion.

And the second thing that I would say is that we are going to stand against division and hate. And we are going to stand up for what we believe in and our vision of the world, which is a vision that affirms and promotes the inherent dignity of every single person. We believe that standing up when they come is incredibly important. I also think that bullies tend to turn away when they realize that people stand up to them. That’s why many of our team members and friend that support equality, and stand against hate and division, will be gathering Saturday in a counter rally that really is a really about hope and love—and the importance of standing up for the meekest among us. We’ll be doing that on Saturday simultaneous to the white nationalist protest at our campus.

SR: This is 30 miles or so to the west of Charlottesville. Do you know why they chose your group and that location?

MD: Yeah, I think I do. They have a real issue with our organization, Nexus Caridades Attorneys Inc. What we do is we fund two law firms. One provides free pro-bono legal services for immigrants in detention and removal proceedings. They speak very candidly about their disdain for free legal services. Not that they are paying for them; that’s not the reason they are angry about that. But they speak with real disgust and hatred for the services that we provide our clients.

We are in the middle of rural western Virginia. It is a little bit shocking that they would have taken aim at us. But I think they did it because we provided charitable bail services to people who protested white supremacy in the past—and also the charitable legal services that we provide immigrants in detention.

SR: Who else besides the Three Percenters are going to come? Do you have any idea?

MD: There are a couple of other groups that we have been able to identify in our research that appear to be participating. There’s a group called the Dixie Defenders. I had not previously been aware of this group, although I am told that they participated in the Unite the Right rally in Charlottesville as well. Also Patriot Warriors, which is a group that I am not familiar with, but in my research they are pretty much active in that white nationalist, white supremacy movement. I don’t know if that group participated in Charlottesville. It looks like some of the participants, or people who identify with that group did.

I anticipate that if these guys do show up, I hope that our being there and standing up will call them out. I think sunlight is the best disinfectant. I think standing as witnesses against their hatred is the best thing we can do. Hopefully, they’ll capitulate and not bring their hatred to our home and our doorstep. But if they do, we’re ready to stand as witnesses against it.

The one thing we know is that in the marketplace of ideas, we win because our ideas are better. The reality is that these people get way too much credibility when the president of the United States did that [endorsement of the alt-right agenda] after Charlottesville. We need to show that what these people stand for is not American values.

Part of the American value is allowing people with disgusting ideas to speak and have their right to speak. Something horrible happens when as a society we begin to accept that speech as normal, or appropriate, to okay. So while they have the right to spew that vitriol, without someone standing up against it, it becomes an accepted practice. And there’s a difference between a respected constitutional right and an accepted practice. In 2018 in the United States of America, we can ill afford to allow these people and their ideas to become accepted practice in our communities. That’s why we absolutely have to stand against this.

Author's note: The militias have a permit to protest from 12-4pm on Saturday, March 3, outside the Nexus Services and Nexus Caridades Offices in Verona, Virginia, about 30 miles west of Charlottesville. For more information about Nexus Caridades' counterprotest, call 540-448-0436. They are asking counterprotesters to gather by 11am and be willing to stay until after the militia's march is over and police clear the area.