Parkland student nails Donald Trump and the GOP: ‘You’re owned by the NRA’ 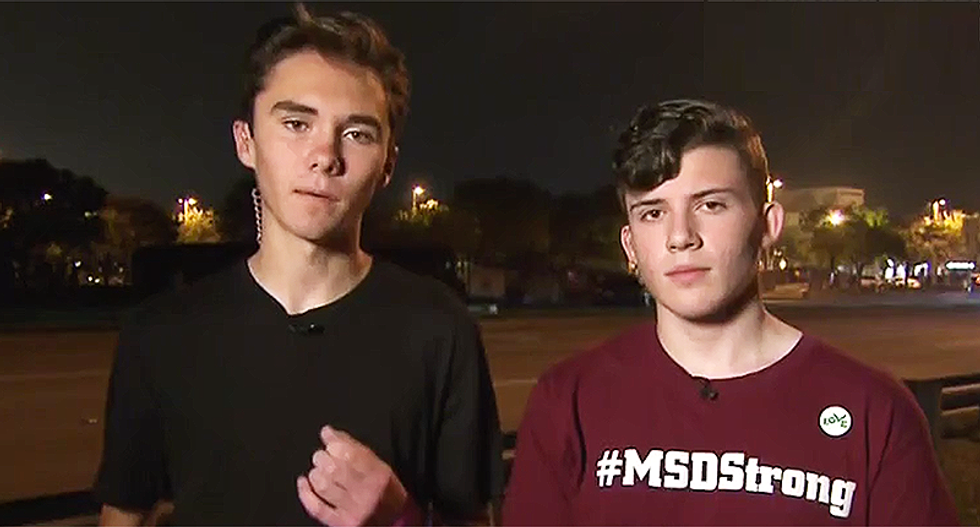 In a Monday interview with CNN's Alisyn Camerota, Parkland students David Hogg and Alfonso Calderon railed against President Donald Trump and other politicians for responding to the massacre at their school with a call for more guns.

After Camerota outlined the White House proposal, Hogg explained it’s only a surface fix to a widespread problem.

"I think what the White House proposal does is it answers one of the three main issues we are trying to fix here, which is mental health, universal background and just more gun control in general," the Marjory Stoneman Douglas High student said. "What President Trump showed when he said he wanted to raise the age to 21 is bipartisanship and he wanted to work together on this and save some lives. But the other thing that he showed after that is he is no better than the other politicians because he called out other GOP members and said essentially that you're owned by the (National Rifle Association) and that's why you don't want to take action."

Hogg explained that's when Trump changed faltered when confronted by the NRA.

"But then he stepped back down from where he was and that's why we're seeing this stuff," Hogg continued. "And I ask him why? Show us you're better than the other politicians, that you aren't owned by the NRA and that you want to take action. The proposals are great. Proposals without action remain proposals."

The NRA came out with a statement claiming that preventing those over 18 from getting an assault weapon would not have stopped any of the high-profile mass shootings in recent years.

Hogg, whose family has endured death threats, called it absurd.

"My response to that is Nick Cruz was 19 and bought his assault rifle," he said. "It's offensive that they say that because this would have stopped him. He legally would not have been able to get this gun, but he was able to. That is part of the reason we had the massacre occur at our school. What the people at the top of the NRA like to hide behind the Second Amendment and say this is our Constitutional right -- we're Americans. What they are really trying to do is let us sell you more guns at an even younger age, put more people at risk, scare more people, cause more violence, kill more people, and sell more guns."

Calderon cut in to agree and ask when someone would use an AR-15 as self-defense.

"I find it absolutely preposterous that anyone can claim that you will use a military-grade rifle to defend yourself, especially in schools," he said. "Because, as you may know, one of our lost teachers here, Mr. Scott Beigel, was shot before he could even reach his classroom. It is ridiculous to say that is a self-defense weapon."

'We can win that war': Democrats prepared to 'punch back' at GOP House investigations

Having learned their lesson years ago when Republican-led House committees investigated former Secretary of State Hillary Clinton over the 2012 Benghazi attack that led spawned seemingly endless hearings and no evidence of wrongdoing, Democrats are preparing to battle back as House Republicans promise to launch multiple investigations and impeachment hearings aimed President Joe Biden, his son Hunter, and assorted administration officials.

As longtime political observer Eleanor Clift wrote for the Daily Beast, Democrats have every intention of "punching back" at the incoming House GOP leadership including Rep. Marjorie Taylor Greene (R-GA) who is obsessed with revenge after previously being kicked off of congressional committees over her first-term stunts.