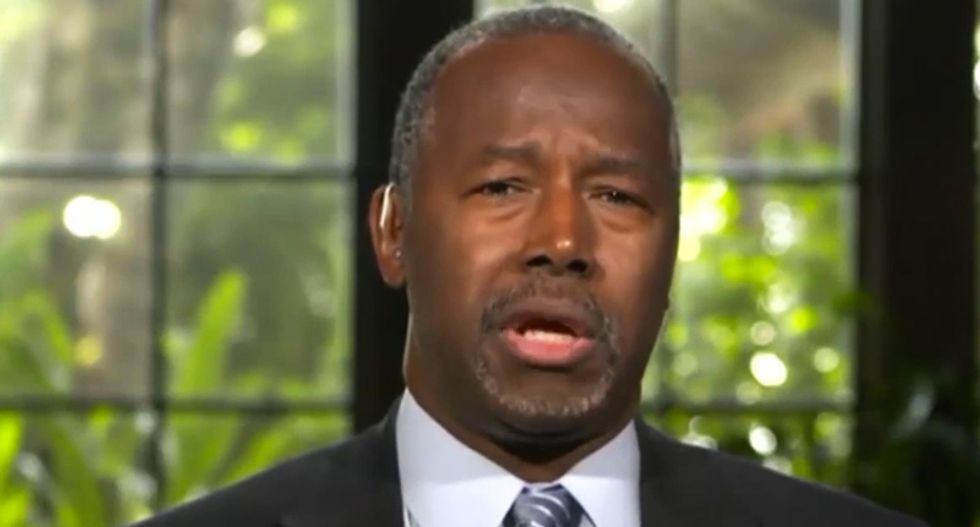 Newly released emails show Ben Carson and his wife personally selected a $31,000 dining room set for his office at the Department of Housing and Urban Development.

The liberal watchdog group American Oversight obtained the emails through a Freedom of Information Act request, and the documents cast doubt on HUD spokesman Raffi Williams' denial that Carson had any involvement in selecting the furniture, reported CNN.

"Mrs. Carson and the secretary had no awareness that the table was being purchased," Willliams told CNN last month, when the story first broke. "The secretary did not order a new table. The table was ordered by the career staffers in charge of the building."

Carson himself blamed the purchase on an unnamed HUD staffer, and told CNN he was "surprised" by the $31,000 price tag and promised to cancel the order -- which the company confirmed had happened on March 1.

"The secretary did not order a new table," said Carson, the HUD secretary. "The table was ordered by the career staffers in charge of the building."

But the newly released emails show two Carson aides discussed the dining set back in May 2017, when they asked about repairing the "fairly precarious" existing furniture, which would have cost an estimated $1,100 to fix.

Carson's statement earlier this month confirmed he feared the old furniture was "unsafe" and "beyond repair."

HUD's scheduling office contacted Candy Carson, the secretary's wife, in August to take part in the office redecorating, although the emails don't show a response from her.

Carson said he and his wife were told there was a $25,000 budget that must be used by a deadline or it would be lost, and they received a $24,666 quote for the furniture.

"The career administration staffer sent the quote to Carson's office," CNN reported, "specifically Carson's chief of staff and his executive assistant, casting further doubt on the agency's assertion that the purchase was made entirely by career staff."

The staffer told Carson the quote seemed to be reasonable and justified the purchase because the previous furniture was purchased in 1988, and receipts showed HUD moved forward with the purchase -- which was now $7,000 higher -- four months later.

One email chain shows serving cart options were approved by "leadership" but doesn't specify who made the request.

That appears to contradict Williams' sweeping denial that Carson and his wife had any involvement in the purchase process, or any interest in doing so.

Helen Foster, a senior career official at HUD, says she was demoted and replaced by a Trump appointee after refusing to break the law to approve the over-budget redecoration.