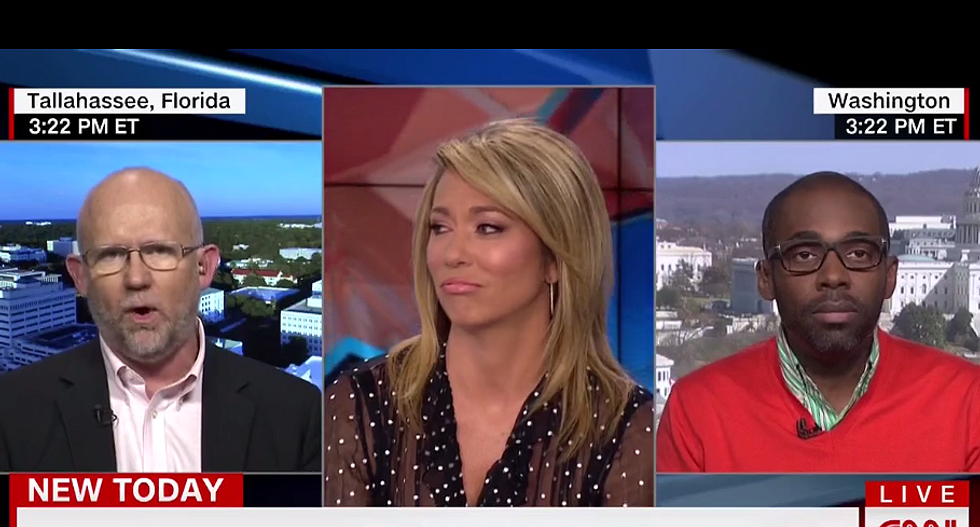 GOP strategist Rick Wilson on Friday tore into Donald Trump defender Paris Dennard in a brutal back-and-forth over the president’s “amoral” and “scuzzy” behavior surrounding an alleged payout to adult film star Stormy Daniels in an explosive segment on CNN.

Wilson told CNN’s Brooke Baldwin Trump’s alleged impropriety won’t hurt him politically because “he feels like his political base is secure.”

“They've told us over and over they will tolerate any amorality, any scuzzy behavior,” Wilson said, suggesting the president is now more interested in how the Daniels affair will hurt his bottom line. “We have to think about Melania's prenup with him,” Wilson opined. “There may be a money equation there as well that he's putting at risk.”

Asked by Baldwin why Trump has remained silent on Daniels, Dennard suggested “the president wants to dignify this story, true or false … this is something that is terribly embarrassing for the first lady.”

As Dennard talked in circles about the “timing” of the alleged affair being a major factor in Trump supporters turning a blind eye to the president’s behavior, Wilson asked, “can I jump in on this for a second, Paris?”

“I feel you're struggling here,” Wilson said as Dennard protested. “Let me help you out here.”

Wilson pointed out Trump’s had a “long pattern of engagement with a variety of women to whom he is not married.”

“Are you telling me that [the GOP] never once brought up the fact that Bill Clinton screwed his way through Arkansas?” Wilson asked. “No. They did it all the time. It wasn't the fact that he did it before he was president.”

Dennard insisted “that’s different” because Clinton “was the attorney general and was a sitting governor of Arkansas and the claims came via someone who was a sitting elected official.”

“No, I'm sorry,” Wilson replied. “Don't you dare talk about respect when he insulted the [Khizr] Khan family, when he insulted John McCain's war service. A man who has no respect for anyone on this earth. The fact that you're defending him on that speaks much more about your character.”

“I don't know you, Rick, but I would advise you to not question my character because you don't know me,” Dennard replied.

Baldwin asked Dennard about Trump’s hypothetical reaction were the tables reversed and Hillary Clinton made such a payment. Dennard conceded Trump would have had a “negative” reaction to Clinton, but continued insisting on the need to separate “apples from oranges.”

After a continued back and forth, Wilson went off, once again, on Dennard’s moral framework.

The pair went at it for several more seconds before Baldwin cut them off.

Wilson later took to Twitter to express disbelief over Dennard’s defense of Trump.

I never even heard of this Paris foll until a few minutes ago, but for the love of God is every Trump supporter that goddamn dense?
— Rick Wilson (@Rick Wilson) 1521228697.0