A scenario as crazy as our president: Here's how Trump could fire Mueller and orchestrate own impeachment -- to grab more power 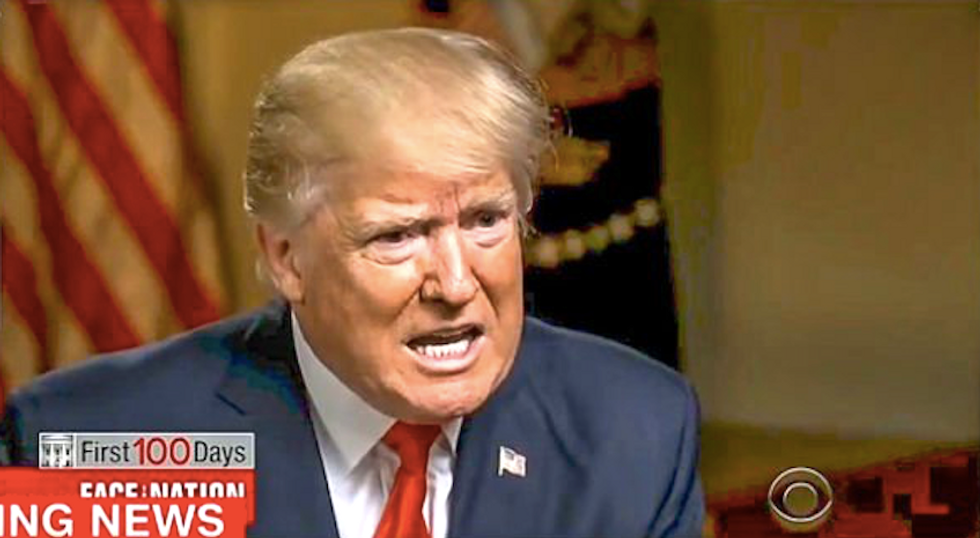 Could this be the future? Imagine this: President Trump and House Republicans strategically push to impeach Trump and clear him of everything Russia-related and otherwise before November’s elections, in order to increase their control over the national political narrative, bait and upstage Democrats, and drive their base to vote in record numbers.

There are hints this gambit could be in the works. One hint is the Republican-run House Intelligence Committee probe of the Trump campaign’s ties to Russia predictably found nothing—a conclusion special counsel Robert Mueller seems likely to reject. Another hint is Trump reshuffling his Russia-related legal team to replace lawyers, like John Dowd, who showed some respect for Mueller’s inquest, with more combative partisans (and Fox News regulars) such as Jay Sekulow and former U.S. attorney Joe diGenova.

Yet another hint comes in the apparently contradictory statements from the likes of Rep. Louis Gohmert, R-TX, who on one hand says Mueller should be fired, and on the other hand, says if Trump did so, it might trigger his impeachment.

“Mueller should be fired. He should never have been appointed and he should never have accepted,” Gohmert said Wednesday, The Hill reported. Gohmert “clarified that he thinks the president should not actually fire Mueller, because Republicans in Congress might impeach him if he did so.”

This twisted utterance could be just another blast from a muddled-thinking Republican. But there are a series of steps Trump and Paul Ryan could take, however risky they first appear, that could easily end up fortifying Trump’s lock on power—because every step of the way the political odds are in his favor. Ponder these steps.

1. Trump fires Mueller. Before firing Mueller, he’d have to fire Deputy Attorney General Rod Rosenstein, who oversees Mueller’s investigation. Firing both men would not just set in motion calls for his impeachment, but would preempt further legal actions by Mueller against Trump’s campaign team, including his family. It increases the odds that the report Mueller files with the Justice Department remains secret, as most of what is reported about his campaign’s ties to Russia comes from the indictments filed in federal court.

2. Democrats and Republicans call for impeachment. That process starts in the House, which the GOP obviously controls. For reasons that are as varied as individual House members, this call snowballs. Democrats take the bait. Many reject the advice of House Minority Leader Nancy Pelosi, who opposes impeachment, as a way to burnish their independent credentials in the midterms. Democrats splinter, unlike Senate Majority Leader Mitch McConnell, who kept his members on the same page while delaying consideration of President Obama’s final Supreme Court nomination until after the 2016 election. Republicans, some who might want to see Trump impeached, and others who want to clear his name and fortify their rule—fall in line.

3. Trump, game plan in hand, goes along. Trump, who relishes every fight, goes along. Despite feigning umbrage and making noisy declarations of his innocence, he remains the politician at the top of the news for months—just like in the 2016 election. However, under this scenario, with Paul Ryan as his political partner, Trump knows that his allies—not Mueller or what’s assumed to be a Democratic majority after November—will determine how this unfolds. The process will be scripted for Trump’s exoneration, based on the porous red-run House Intelligence Committee investigation. Democrats, or even individual Republicans, may raise other issues—like Trump’s sexual behaviors or business ties to mobsters—but Ryan's team brushes them aside.

4. Trump, no surprise, is cleared of all charges. What other outcome could there possibly be? Will the Koch brothers pull strings and try to get their man, Vice President Mike Pence, a promotion? Perhaps, but Trump’s team will drive the process. They will make much ado about vacuous accusations while being careful to avoid anything substantive. Fox News, Breitbart and the rest of the right-wing echo chamber will go crazy defending Trump, attacking Democrats and declaring Hillary Clinton should be in the criminally accused chair, etc. And then, surprise, surprise: the president is cleared of all charges—before 2018’s midterms.

5. Trump declares his innocence, over and over. The House doesn’t vote to send Trump to the Senate for an impeachment trial. Instead, he’ll shout he has been cleared of all charges—Russia and otherwise, as floor-managed by House leadership. Trump will yell that a jury of his peers, the most representative electoral body in the nation—so on and so forth—has decided he is as innocent as a fresh snowfall. All the ugly innuendo, accusations and suspicions have been dealt with and dismissed, in the fairest and most democratic way—or so he’ll say.

6. Trump then turns to November seeking vengeance. Turnout for midterm elections has historically been roughly half of what it is in presidential years. As polls have shown, Trump’s voter base reliably has been in the upper 30s to 40 percent range. But after a Republican-driven impeachment process has cleared him of everything, Trump and the GOP head into November’s midterm elections with the most riled-up base they can imagine, and one seeking vengeance against a blue wave of Democrats.

Possible facts like the notion the GOP turned the House into a kangaroo court won’t matter. There won’t be political promises coming from Republican congressional candidates on the 2018 campaign trail. There will be calls for revenge, for giving Trump his due, for the GOP to consolidate its power. All of this could come after the Republicans staged this entire theatrical display, ensuring the odds favored them every step of the way.

Sure, this is intriguing, but get serious!

Let me admit that I did not make up this speculative narrative. A longtime political insider with decades-old ties to the Democrats told me he had discussed it with a sitting U.S. senator, who did not dismiss it out of hand, but even said that if House Speaker Paul Ryan unleashed all of this, then Democrats could not be counted on to discipline themselves to postpone any impeachment process until after November’s vote.

Most critically, one has to ask—is Trump crazy enough to go down this road? The answer is obvious. His political personality, combative impulses and lust for authoritarian power all suggest he would be attracted to this kind of political roll of the dice. Ryan and the House GOP are not that different. They know that as long as 2018 is a more or less midterm-as-usual election, they are going to get clobbered and likely lose their majority rule. At worst, they go down fighting. At best, the Republicans double down on their power and Trump, a man not content to be a mere president, is now a Republican king.

And what about the Democrats? They’re now involved in an intra-party battle between Berniecrats and middle-of-the-road centrists in their spring primaries. More than a few senators and an ex-vice president are spellbound by their prospects for the 2020 presidential election. House Leader Pelosi doesn’t have the respect she once commanded. In other words, the Democrats are, to some degree, ripe for exploitation should Trump fire Rosenstein and Mueller and House GOP leaders throw the first impeachment punches.

Does this sound wild? Does it sound crazy? Yes. But we are in a wild and crazy political world where the abnormal is now normal. Right now, Trump and Ryan hold the most powerful cards. Trump will do something soon with Mueller. Ryan has to do something soon if he wants to remain Speaker. Orchestrating impeachment may be their ticket.