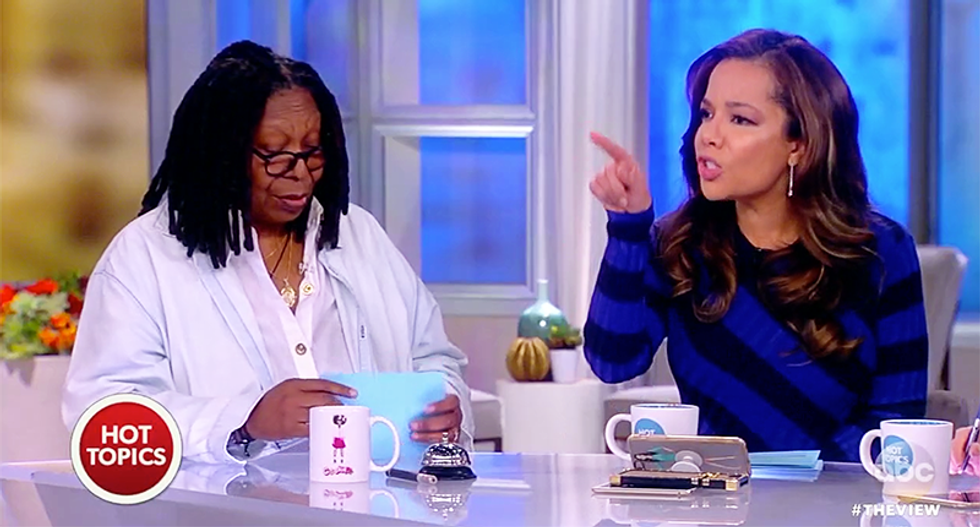 President Donald Trump said Monday in a speech that he fully intends to give the death penalty to drug dealers. However, the women of "The View" noted that the opioid addiction is rooted in big pharma and doctors who over-prescribe opioids.

"He's such a simple thinker," co-hose Joy Behar said. "His solution is build a wall. Lock 'em up. Kill them. He never understands what causes an opioid addiction. What makes people commit any kind of crime. He never goes beyond the superficial. He's incapable of understanding anything that's not right in front of him and he loves. We all know he loves a dictator. Maybe they do this in the Philippines, I don't know, possibly."

Sara Haines agreed, saying that people have been awful at dealing with this. Indeed, one person on Trump's opioid board called it all a sham.

"They're feeding to an addicted community," she said. "It's such a layered issue. You have big pharma -- pharmacy. Doctors, there's also some fault there with some people overprescribing things. The problem is the modern day epidemic -- it used to be a street drug. Now it's something that's in -- that medical professionals are saying, 'You should take this.' And I trust my doctor."

Sunny Hostin wondered if Trump is now thinking doctors should get the death penalty. She noted, however, that there are doctors that are facing charges for people who end up overdosing on the drugs that they prescribe.

"And you attack the opioid crisis, which, by the way, has been going on in the black community for over 30 years," Hostin continued. "I don't know why now it's a crisis and it wasn't a crisis then. But the suggestion that it's somehow that that's how you solve a crisis, just shows how backwards his thinking is."

Meghan McCain agreed that if it's something like a major drug kingpin like el Chapo, but for those who get addicted to prescription drugs, or those who use cbanibus oils, she doesn't understand why someone should be put to death.

"I come from a family of addiction," she confessed. "I think we need to have more compassion than culturally in general for addicts for this disease, for why people come the lace in their lives that they feel like that's the only place they can go to. There's a big problem in veterans' communities with being over-prescribed. That's more the focus I would like the to go to.

"The whole idea that we are not looking at the fact that -- all these things go on a personal basis," Whoopi Goldberg said. "You know, when you bring up alternatives, and I'm not going to say what I'm talking about. But there are alternatives to some of these drugs that are not so harsh on the body."

Goldberg has long been an advocate of marijuana legalization and even McCain agreed with her.

Haines brought up the buckets of money being spent from pharmaceutical companies to lobby not only lawmakers but doctors to put drugs in their hands. She noted that there are even conferences that teach doctors to prescribe their drugs.

"When you're criminalizing people for having a small amount of pot and it's legal," McCain noted. "By the way, in five years, it will probably be legal entirely across the country. The impression of prescribing and taking vicodin versus possibly using cannabis oil in one way or another is totally crazy, totally out of whack. Especially with cancer patients now."

"It's the old war on drugs didn't work," Hostin cut in. She noted the so-called war "disproportionately affected people in the latino and African-American communities." Trump, she said, is trying to do the same thing, which she called "dog whistle politics" of simply putting specific people in jail and giving them the death penalty.

"He's thinking of a different profile of a drug dealer," she said.

Goldberg alleged Trump wasn't thinking at all, "because he doesn't know what he's talking about. That's the problem."